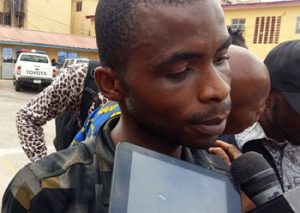 A boy who allegedly masterminded the abduction of the junior brother of his boss in Lagos has been caught.

The suspect identified as Uchenna Eze from Imo state was on Sunday paraded alongside his second in command, Vincent Uchenna by Lagos Police CP, Edgal Imohimi.

According to police investigation, the abduction was carried out around 5:20pm on Friday the 6th of April 2018.

Edgal said the suspect bundled their victim, Alvin Onuoha into a Toyota car as he was about entering his house.

The suspect in his confession said he stayed with his victim in the same house. He further revealed that he carried out the abduction to get his money back from his boss, who specializes in swindling.

Uchenna Eze’s boys were arrested as they were about collecting the N200,000 ransom they demanded for their victim’s release.