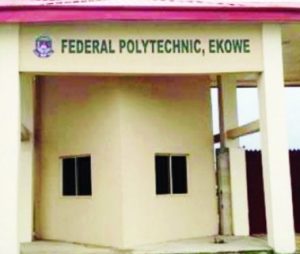 The drowning death of a student at the Federal Polytechnic Ekowe in Yenagoa Bayelsa state has sparked a mass protest.

The deceased identified as Ade was said to have drowned in a river bordering the university when he tried to fetch water for domestic use following lack of water on campus.

It was gathered that lack of potable water on campus forced students to rely on the river and other unconventional means for water following management’s insensitivity to their plight.

Tragedy was said to have struck on Sunday evening when Ade and his friend went to the river to fetch water.

A source, who spoke in confidence, said Ade fell into the river and drowned because he lacked swimming skills.

“Two of them could not swim so when Ade fell into the river, his friends raised the alarm . But before people could get to him, he had already breathed his last”, he said.

Angered by the incident, the students were said to have taken over the campus in protest.

It was also learnt that the situation was worsened by lack of presence of the school management on campus located in Ekowe, Southern Ijaw, as the Rector, Timi Seiyaboh and his staff preferred operating from the liaison office in Yenagoa.

The students alleged that all their attempts to call the attention of Seiyaboh proved abortive adding that there was no management official of the school to calm their frayed nerves.

It was gathered that a detachment of police operatives was sent to the troubled school to avert breakdown of law and order.

A human rights activist, Alagoa Morris, faulted the school management on its handling of the matter and advised officials of the school to live up to expectations.

“It is interesting to hear that he police arrived the campus which is situated along the River Nun, but very unfortunate to also hear that the authorities of the institution are remaining in Yenagoa inviting students to come out.

“Whether the transport fares of the students will be shouldered by the school authorities, it’s unacceptable. The school a not be managed from Yenagoa.

“The rector and other management staff have to go down to Ekowe and justify their pay and engagement by the Federal Government”.

When contacted, Seiyaboh said he was on ground to handle he issues on campus and denied allegations that was managing the school from Yenagoa.

Continue Reading
You may also like...
Related Topics:ekowe, federal, polytechnic