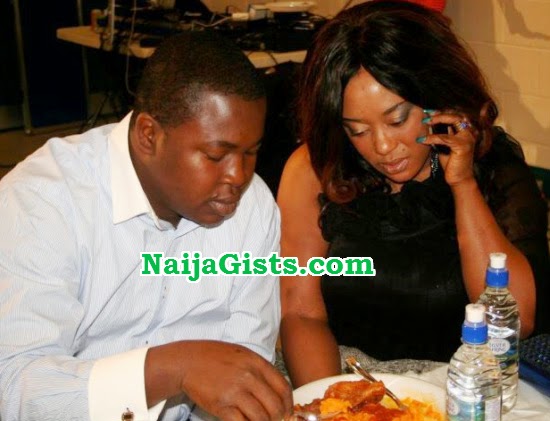 We dated for five years, and as far as I’m concerned, it ended in January this year. The relationship ended earlier this year because he was acting funny. At the onset, he was like he likes me, but I told him that I’m older than him though that’s not really a problem. Even the man that married me wasn’t my age mate. He was on my matter begging me that he likes me, and I wasn’t dating anybody then.

I considered him because of his consistency. I like bold people, and it was his boldness that won me over. Even if a tiny boy woos me, I will consider him because of the boldness. Then, I confided in a friend, and she was like, are you crazy, or out of your mind? Why Baba Tee of all people? The age difference wasn’t even the issue, but it was about his caliber. But I’ve always been a crazy person when it comes to taking decision; nobody can tell me what to do. Anyway, he kept on pestering me, so I sat him down one day and told him that what does he really want from me, because I already have kids, but he doesn’t have any, so he had to be realistic. But he replied that inasmuch as I hadn’t attained the age of menopause, he could still impregnate me. I made him understand that the relationship wouldn’t last forever.

I even asked him that does he have a girlfriend, and that if he doesn’t have one, he should get a girlfriend and let her get pregnant for him, because he was already concerned that at his age, he hadn’t given birth.

Even if you don’t like somebody from the beginning, it will get to a stage where you will start falling for the person, so I wouldn’t lie that I started to like him and I tried to get pregnant as well, but it didn’t work. Getting pregnant wasn’t even my own wish, it was just a way to compensate him because, I’ll give it to him, he is not your everyday young man who is always gallivanting about. I’m not like that as well, and he knows that about me. A lot of people don’t know that I keep to myself a lot. I hardly have boyfriends, and he can testify to that. Except I have events or meetings to attend, I rarely leave my house. I don’t have a boy friend apart from him. People who are close to me know that all the things written about me are false. The false stories they used to write about me used to break my heart, but not anymore.

Now, I just see it as the price I have to pay for fame. In January, we had a quarrel because he was becoming cranky, and it was due to the fact that he wanted a child, but he felt I was being non-challant about it because I told him he was free to go and impregnate someone else. Then he began to read meanings to things which he never used to do before. If I used the picture of any man on my social media accounts, he would ask if that was the person I was dating.

I started to get off the hook as well because he knows I don’t do things like that. Eventually, we had a quarrel and he called me over forty times, and I didn’t pick my phone because I wanted him to know that I’ve had enough. I have a lot of things on my mind; I’m the only one raising my kids, and I didn’t want any trouble which is why I didn’t want any relationship in the first place. I made up my mind then not to pick his calls again because I was tired of his troubles. He’s a jealous and possessive person.

Even though he knows that I don’t do all those things, he feels that if I have a male business partner, then something must be going on between us. I’m no longer a kid, and I have passed that stage of my life. Anyway, he saw the handwriting on the wall, and that was how the whole thing ended. He began telling people to ask me if it was really over, but I always told them to just leave us alone. However, someone brought the news to me that he was now dating someone else, and I felt we couldn’t have just broken up, and he became so close to another girl within that short period. I reasoned that he must have been dating her for a while though I had always been asking him but he never opened up to me.

Anyway, I was happy for him. Even most of the things I sell like bags and shoes are still in his house that I paid the bulk of the rent for him in Ikorodu. When I came to Nigeria, I even involved the Commissioner of Police because I planned to barge in on him, and take back my car and other properties, but I reconsidered because I have a project I’m planning at the moment and I don’t like distractions. Perhaps, I’ll do that when next I come to the country. Someone even sent me a picture on Instagram that Baba Tee made a video with his girlfriend, and the television in his house belongs to me. And I replied that even the spoons in his house belong to me. The person asked if I wouldn’t go and take everything.

I will but in due time. There was a time I got a message which I think was from his girlfriend, that so I want to come and pack my things, that I wouldn’t do such a thing again. And I felt nobody can threaten me in my own country. When I told my friend who knows the Commissioner of Police about it, she said it was a threat and advised me to take it up. But I do not want to give the world a wrong impression about me than they already have.

On the abuse allegation, Yetunde said:

How could I abuse him, is he a baby? He said he never got any benefits from me, but he is driving my car? I also furnished his house, as well as pay his rent here in Nigeria. I bought him a Daewoo Tacoma car and 80% of the things in his house were bought by me. He may have sold the car because he knows I’ll be after him for it.