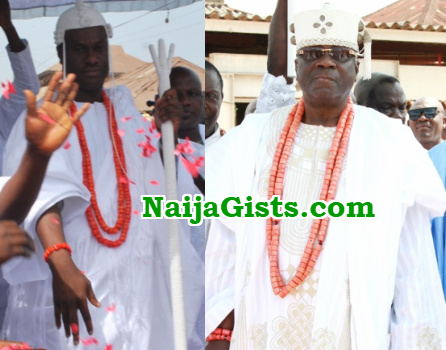 The President-General of the Agbekoya Farmers Association in Nigeria, Chief Aremu Okikiola, has called on the Oba of Lagos, Oba Rilwan Akiolu, to respect the Yoruba traditional hierarchy instead of debasing it.

Oba Akiolu snubbed Oba Ogunwusi at a public in Lagos on Tuesday when they latter attempted to greet him.

The Agbekoya chief, who spoke through the National Publicity Secretary of the association, Chief Olatunji Bamidele, said it was wrong for traditional leaders to disrespect themselves in the public, saying that Agbekoya, as a Yoruba socio-cultural group, would not support any traditional ruler that displayed immature attitude in public.

“Any mature traditional ruler should not fight in the public. They should find a way of solving whatever the issue is in private. The Ooni and the Alaafin are the most respected Yoruba obas. Akiolu should not disrespect the tradition.”

“Akiolu should not be rude to that extent because he is only an Oba of Lagos. Agbekoya will not support any traditional ruler that is rude to the Ooni.”

Speaking on behalf of the Olubadan of Ibadan, Oba Saliu Adetunji, Director, Media and Public Affairs to the monarch, Adeola Oloko, told our correspondent that the Olubadan revered the Ooni and Akiolu, saying that he was making contact with the two monarchs to find a solution to the issue.

“I can tell you that the Olubadan had been making contacts with the Ooni and the Oba of Lagos, whom he respects mostly, with the view to mediating in the issue. He will talk to the press as soon as there is information to pass across. As an elder, he is making the contact,” said Oloko.

A chieftain of the pan-Yoruba socio-cultural association, Afenifere, Chief Femi Okunrounmu, said Oba Akiolu’s action was an embarrassment to the Yoruba race.

He said the action portrayed the Yoruba as an unorganised set of people before the world.

He noted that it was unfortunate that some monarchs in Yoruba land did not seek the interest of their subjects.

He pointed that Yoruba elders would talk to Oba Akiolu on what he termed unbecoming behaviour.

Also, the Yoruba Youth Socio-Cultural Association has condemned Oba Akiolu for snubbing the Ooni of Ife, Oba Adeyeye Ogunwusi, publicly at a function.