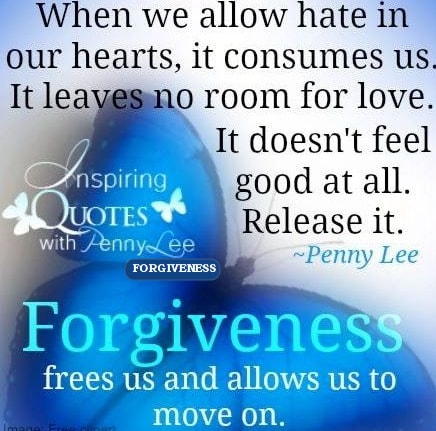 “Always forgive your enemies; nothing annoys them so much.” –Oscar Wilde

Life is an adventure in forgiveness. The legendary Bob Marley once said, “Everyone will hurt you, but you need to know those that are worth the hurt”. Life is full of pains, hurts, betrayals, back-stabbings, but it is also full of people overcoming them. Many times people will keep getting on your nerves, but you also will need to keep doing the forgiving, not really as an excuse for them, but as a way of building your inner threshold in accommodating people’s flaws.  Robin Sharma once said, “Forgiveness isn’t approving what happened. It’s choosing to rise above it.”

Lewis B. Smedes once said, “To forgive is to set a prisoner free and discover that the prisoner was you”. The worst prison is the one where we don’t even know that we are locked up! Many didn’t know that Nelson Mandela’s greatest battle wasn’t against apartheid, it was actually against unforgiveness. One of the greatest personal development lessons to learn from Mandela which is also important for family bonding and nation building is the act of forgiveness. He was an epitome of simplicity and disarming humility.

About some few days ago, the whole world celebrated the centenary life of a man that has become a standard and model for forgiveness. Madiba as he is fondly called made us realize that love is an act of endless forgiveness. He taught us all one of the most enlightened ideologies of the 21st century: We conquer by forgiveness! When you choose to forgive those who have hurt you, you take away their power.

Nelson Mandela once said, “Resentment is like drinking poison and hoping it will kill your enemies”. Unforgiveness is now classified as a disease in medical book. Forgiveness therapy is now being used to treat disease like cancer. It has been ascertained that 61% of cancer patients have forgiveness issues according to a research by Dr. Michael S. Barry, the author of the book: “The Forgiveness Project”

Dr. Steve Maraboli said, “Forgiveness is a reflection of loving yourself enough to move on.” Without forgiveness, life is governed by an endless cycle of resentment and retaliation. People that don’t forgive always return back to the past. As Martin Luther King, Jr. said, “We must develop and maintain the capacity to forgive. He who is devoid of the power to forgive is devoid of the power to love”.

Are you suffering from deep hurts? Are you suffering from abuse? The greatest form of abuse is holding on to the images and the acts of your abusers! Les Brown said, “Forgive anyone who has caused you pain or harm. Keep in mind that forgiving is not for others. It is for you. Forgiving is not forgetting. It is remembering without anger. It frees up your power, heals your body, mind and spirit. Forgiveness opens up a pathway to a new place of peace where you can persist despite what has happened to you.”

When you forgive people, you release yourself from their control. Forgiving others and yourself is one proof of self-love. It shows you love yourself too much to carry unnecessary weights around. The brightest future will always be based on a forgotten past.  You can’t go well in life until you let go of your past hurts and heartaches.

In his book, “The Long Walk To Freedom”, Mandela chronicled his long and torturous walk to freedom and how he was formed in the crucible of affliction. When Nelson Mandela was freed after 27 years imprisonment, he said that he refused to step out of the prison until he was so sure that he had forgiven the people that put him there because failure to do that will simply means that he was going to walk out into a higher prison, a prison without bars, a prison that will follow him wherever he goes for the rest of his life! As the book ultimately summarize: Forgiveness is the easiest way to find true freedom.

Joyce Meyer was repeatedly abused by her father sexually at a very young age. She became so irritated that it almost ruin all of her other relationships with people. She got to a juncture in life where she realized that her higher self is being stifled from emerging as a result of the bitterness and unforgiveness against her father. T. D. Jakes said, “I think the first step is to understand that forgiveness does not exonerate the perpetrator. Forgiveness liberates the victim. It’s a gift you give yourself”. There are deep truths about forgiveness that is worthy of note:

FORGIVENESS IS NOT FORGETTING: Louis Dudek said, “What is forgiven is usually well remembered”. Forgiveness doesn’t mean ‘forgetting’ but it does put us on the path to having a good memory of the past event. Oprah Winfrey once said, “True forgiveness is when you can say ‘Thank You for that experience’ “

FORGIVENESS IS NOT FOR OTHERS; IT IS FOR YOURSELF: Louise L. Hay said, “Forgiveness is for yourself because it frees you. It lets you out of that prison you put yourself in”. Forgive others, not because they deserve forgiveness, but because you deserve peace! Robin S. Sharma said, “Forgiveness isn’t just a blessing you deliver to another human being. Forgiveness is also a gift you give yourself”.

FORGIVENESS IS THE REAL ‘REVENGE’: Josh Billings once said, “There is no revenge so complete as forgiveness”. If you really want to get even with people, then forgive them! When we seek revenge by trying to hurt others, we directly give them more space to occupy in our mind. Isabelle Holland said, “As long as you don’t forgive, who and whatever it is will occupy a rent-free space in your mind.”

FORGIVENESS IS THE FIRST STEP TOWARDS HEALING AND HAPPINESS: When a deep injury is done us, we never truly recover until we forgive. Marianne Williamson said, “The practice of forgiveness is our most important contribution to the healing of the world”. When you forgive, you heal. When you let go, you grow.

FORGIVENESS IS NOT WEAKNESS; IT IS STRENGHT: Forgiveness is a virtue of the brave. Mahatma Gandhi said, “The weak can never forgive. Forgiveness is the attribute of the strong”. We think that forgiveness is weakness, but it’s absolutely not; it takes a very strong person to forgive.

FORGIVENESS DOES NOT CHANGE THE PAST: Forgiveness does not change the past, but it does enlarge the future. Bernard Meltzer said, “When you forgive, you in no way change the past – but you sure do change the future”. Forgiving does not erase the bitter past. A healed memory is not a deleted memory. Instead, forgiving what we cannot forget creates a new way to remember. We change the memory of our past into a hope for our future.

Never wait for apology before you forgive someone, doing that means you’ve waited too long enough. Forgiveness doesn’t come naturally, it is an act that needs to be learnt over time. Until you learn to release those who have offended you and totally forgive them, you’ll continue to live your life in chains. Your ability to forgive is an essential key to living a fulfilling life. Let go of the resentment, let go of the bitterness, let go of the desire to get even. Bernard Baruch said, “One of the secrets of a long and fruitful life is to forgive everybody everything every night before you go to bed”.

I will also want to talk about a special form of forgiveness: learning to forgive yourself. Sometimes, it is easier to forgive others than to forgive ourselves. The path to forgiveness is not an easy one, especially when the person you’re trying to forgive is yourself! We are permitted to make mistakes only when we can really learn from them. Tallulah Bankhead said, “If I had to live my life again, I’d make the same mistakes, only sooner.” Making mistakes doesn’t make you a ‘mistake’ and no matter how many mistakes you make, you’re still way ahead of everyone who isn’t trying. Mistakes are the only infallible evidence that we are human and you must learn to forgive yourself. Robert Quillen said, “A happy marriage is the union of two good forgivers.”

Finally, we must be courageous enough to ask for forgiveness when we know that we’ve offended others. Bruce Lee once said, “Mistakes are always forgivable, if one has the courage to admit them”. Forgiveness says you are given another chance to make a new beginning. As the old saying goes: “To err is human; to forgive, divine”!

QUOTE OF THE WEEK: “Without forgiveness, there’s no future”- Desmond Tutu