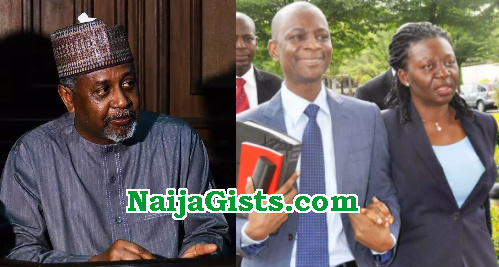 A Zenith Bank official has told a Federal high Court in Abuja that $40 million was transferred from the office of the National Security Adviser (NSA) into the account of a company owned by a cousin of former President Goodluck Jonathan, Azibaola Roberts, and his wife.

Olabode Farinola, a compliance officer with the bank, is a principal witness of the Economic and Financial Crimes Commission, EFCC, in the ongoing trial of Mr. Roberts and his wife, Stella.

He told the court presided over by Justice Nnamdi Dimgba that the money was transferred to OnePlus Holdings LTD from the office of the NSA according to bank description.

Under cross-examination by counsel to Mr. Roberts, Chris Uche Mr. Farinola also admitted that the NSA never complained to Zenith Bank that the $40 million was wrongly transferred.

“I’m not aware of the purpose of the inflow or how it was disbursed but we didn’t receive any letter from the NSA that the money was wrongly transferred”, Mr. Farinola said.

Mr. Roberts and his wife are facing a seven-count charge brought against them by the EFCC.
They were accused of diverting $40 million meant for the supply of tactical communication kits for Nigeria’s Special Forces. The funds were allegedly transferred from the account of the Office of the NSA domiciled with the Central Bank of Nigeria.

During a previous cross examination, Ibrahim Mahe, another principal witness had told the court that only the former NSA‎, Sambo Dasuki, could explain why OnePlus Holdings Limited got a $40 million pipeline security contract.