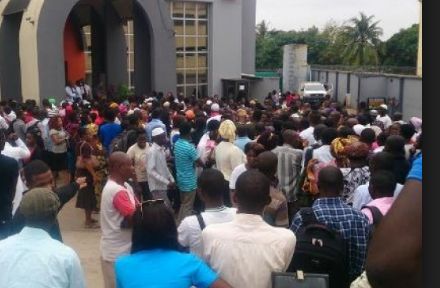 In Warri Delta State, one person was feared dead while many others were reportedly wounded in stampedes in various banks after the announcement of the suspension of the MMM accounts of about 3.3 million Nigerian participants in the scheme.

The contributors who received the news with shock were said to have rushed to the banks to verify the authenticity of the news. In the commotion, a man who was expected to cash N1.5 million of his investment, slumped and died when he could not withdraw the money.

Two other persons who also slumped in the same manner were quickly revived by sympathisers, while 12 others sustained various degrees of injuries in the melee.

As the drama played out, hoodlums took advantage of the rowdy situation to extort money and robbed customers. Meanwhile, medical experts have been reacting to the seeming confusion of MMM.

One of them, Nwaiwu Iheukwumere, said the devastating effects of MMM’s demise is currently evident in hospitals across the country with respect to the physical, mental,emotional and spiritual well-being of Nigerians.

“Mental homes are beaming with patients of different ages. This, of course, is associated with what has just happened with the MMM scheme. But, what we are seeing now may be small compared to what will happen when the scheme finally collapsed. It’s just a matter of time; it won’t take long before the bubble will burst,” he said.

He, nonetheless, listed other psychological effects to include anxiety disorders. People, according to him, will become anxious while apprehension will grow rapidly.