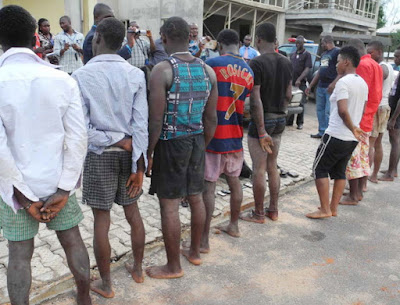 The Kogi State Command of the State Security Service (SSS) said on Wednesday that it had arrested 10 suspected kidnappers .

The state SSS Director, Mr Joseph Okpo, told newsmen in Lokoja that the suspects were arrested in different parts of the state in the past two weeks.

Okpo, who spoke while parading four of the suspects before newsmen, said that the suspects were arrested in full military combat uniform last week.
According to him, the suspects are Haruna Saleh, Kabiru Shuaibu, Mumuni Adamu and Tukur Shuaibu.

The SSS Director said that the suspects were arrested on the Lokoja-Abuja road on their way from Kaduna with the intent to link up with their other accomplices in Obajana area, where they had planned to kidnap some people.

He said that the suspects had started making useful statements, adding that the state Police Command had been contacted to investigate the source of the military uniforms.
Okpo said that the suspects, during interrogation, confessed to have carried out six operations between the Ramadan period and the day they were caught.

“Investigation has revealed that most of the kidnappers operating in the state are from outside Kogi. The people are taking advantage of the geographical location and the route structure of the state.”

Okpo pledged the commitment of the SSS to cooperate with other security agencies to address the security challenge facing the state .

One of the suspects, Mumuni Adamu, said that they bought the military uniforms from a commercial motorcycle operator at the cost of N1,500 a pair.

Adamu, who claimed to be the leader of the gang, said that he had been living in Obajana for almost six years but got involved in kidnapping and other criminal activities in 2015.