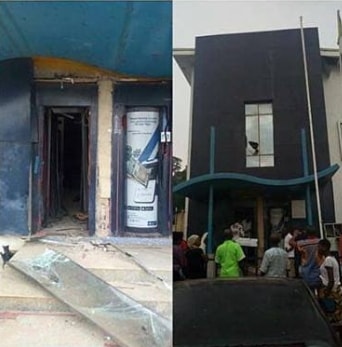 According to residents of the quiet town of Igarra, the robbers carried out deadly operations at Unity and Keystone bank shortly after they invaded a police station in the area to demobilise the officers on duty. Sadly they killed 2 people in detention and a policeman before setting the station on fire.

They soon moved to the banks located about 1.2km from the police station where they unleashed terror on customers after they couldn’t get access to the banks vaults.

A witness who identified himself as Obende Ofei said residents tried to resist the robbers but the dare devils overpowered them and killed about 6 of them.

Photos: Recently Widowed Woman Delivers Baby Girl, Buries Her Alive In Kaduna To Cover Up Adultery
Saraki Betrayed His Father & Sister Many Times, He Is A Mean Man With Selfish Interest – APC