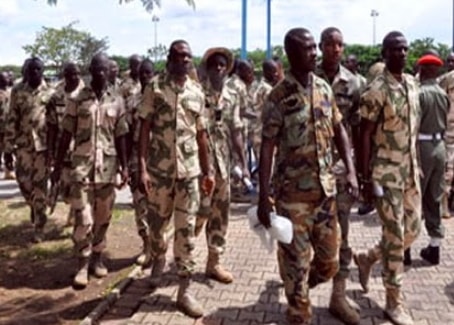 A General Court-Martial (GCM) set up by the Nigerian Army has sentenced 13 soldiers to death and life imprisonment for offences ranging from manslaughter, murder, torture to assault and arson.

This is even as the army has reiterated its commitment in the fight against terrorism in the North East, and other internal security operations across the country.

Chief of Civil Military Affairs, Major-General Nuhu Amgbazo, disclosed this in an exclusive interview with the Daily Sun in Abuja.

He refuted reports and insinuations, especially from international human rights groups, that the Nigerian Army has failed to act on allegations of rights abuses against its personnel.

Amgbazo, while noting that several court martials are currently sitting in virtually all the divisions of the Nigerian Army to try erring officers and soldiers, said: “For anybody or any organisation to come up and say nothing is being done is most unfair. Unfortunately, they misunderstand the professional angle of the Nigerian Army.”

He told Daily Sun that even though the army has lost a good number of its personnel in the anti-terrorism war, while several others have been maimed and left with permanent disability, it would not condone any act of indiscipline from its personnel while carrying out their constitutional roles.

“There have been a lot of insinuations and false reports, especially by international rights groups that have continued to claim that the Nigerian Army and other security agencies have done nothing about human rights abuse cases brought before them.

“That is far from the truth because we have our own justice system.

“Any military person is subject to both military law and civil law and you know the law has its own processes, but I can authoritatively tell you that all the cases that have been reported are being investigated; some are within the jurisdiction of the courts.

“As we speak now, there are standing court-martials in 7 Division, Maiduguri, to handle all cases that have to do with our military operations.

“And we also have court martial in some divisions like here in Army Headquarters Garrison, Abuja, Kaduna and Enugu, to try other issues not necessarily for human rights but for any kind of abuse.

“So, I can tell you now that the cases that have been concluded and the records of proceedings have been forwarded to the appropriate superior authority.

“For instance, since December 2017, we have had 13 cases that have been concluded.

These 13 cases have been concluded and sent to superior authority.

“Whether it is going to be appealed or if it will go up to the Supreme Court, that goes beyond the army because we have done our own (part). We have sentenced them based on the gravity of their offences.

“The offences range from man slaughter, murder, torture, assault to harm. A soldier was even accused of setting ablaze a fellow human being and these are grievous abuses and the Nigerian Army will never tolerate that.

“There was also the case of an unlawful detention and torture of a 13-year-old boy. “So, all of these things, 13 of them and others, are in the pipeline as we speak. Court-martials are already in place and treating all the cases as they come.

“We are a professionally responsible army, led by a true and professional soldier in the person of Lieutenant-General Tukur Buratai.”