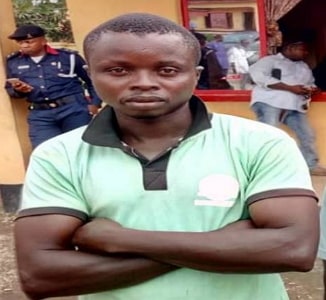 A 39-year-old driver, has been arrested in Akure for sexually molesting and subsequently impregnating his neighbour’s daughter. Dare Omoju, who lives at 38, Ajegunle Street, behind Lao Petrol Station in Akure, was nabbed following a report by the minor’s mother.

He was paraded before journalists on Friday at the office of the Nigeria Security and Civil Defence Corps (NSCDC) in Akure, Ondo State.

Pedro Awili, the NSCDC State Commandant, said the suspect was nabbed following the report to the command.

According to Awili, Omoju’s son, identified as Femi, had previously molested the girl.

“In the course of our investigation, Mr Omoju’s son (who is called Femi), had earlier had sexual intercourse with this same girl some years back.

“The father, having discovered that, also took over from his son and continued the business of having sex with the same girl. Shamefully, the girl is already two months pregnant for him,” Awili said.

He added that the command found out that the suspect and the parents of the victim lived in the same neighbourhood.

However, Omoju denied having sexual intercourse with the girl.

“This small girl is lying against me,” he angrily told reporters.

The victim [name withheld] spoke to journalists and explained how father and son took advantage of her.

The 14-year-old secondary school student stated that the man always threatened her not to tell anyone about his actions.

“The first time he slept with me was in his house, when I came to play in their room with his daughter, who is also my age mate. I slept off in the house that day, but suddenly at night, he came to wake me up and raped me repeatedly.

“There was another day, in the same house, I was with his daughter and he sent her on an errand. While awaiting her return, he slept with me.

“It was my mother that discovered I was pregnant, when I vomited all over the place, and she immediately took me to the hospital for a test.

“The medical test was positive and I had to confess who impregnated me, which is Mr. Omoju.”