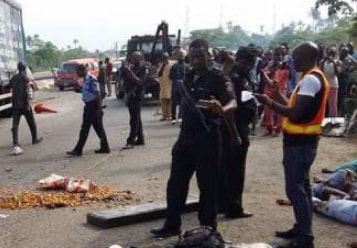 At least 18 people lost their lives last night in a multiple collision involving an SUV, a Ford car and a commercial bus.

According to rescuers, a reckless bus driver who caused the fatal collision around 6:30pm attempted to overtake a vehicle when it rammed into an Xterra SUV and an unmarked Ford at the Alapako axis of the Lagos Ibadan Road.

The remains of the 18 victims of the fatal collisions have been transferred to a mortuary in Ipara in Remo Local Government Area of Ogun state.

Attempts are being made to contact the family members of the deceased. More details later.