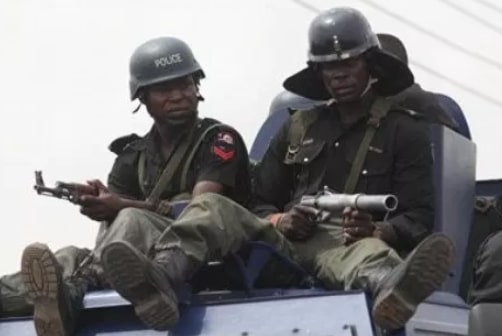 Some suspected armed robbers today killed two mobile policemen and driver who were on patrol along Nnamdi Azikiwe bypass, Kaduna.

We gathered that the incident occurred around 5:00 am when the gunmen appeared from nowhere and started firing at the policemen in sight, leading to instant death of two men and a driver, while five others were critically injured.

Kaduna State Police Command has confirmed the incident, saying that, detectives have been mobilized to the area to track down the fleeing killers.

The Command Public Relations Officer, DSP Yakubu Sabo said the slain policemen were on foot of the area when the incident occurred.

According to DSP Sabo, “Today at about 0525hrs, some unknown armed men attacked our policemen who were on foot patrol along Nnamdi Azikiwe Express way by IBBI company of Kakuri Area in Kaduna.

“After a fierce gun duel, two of our men and a civilian driver were killed. Five other policemen sustained gun injuries and are receiving treatment at a hospital in Kaduna.

“No arm was taken away by the attackers due to the repelling gun power of our men. Some of the attackers escaped with gun injuries. They quickly retreated and fled the scene.

“Detectives have been mobilized to the area with a view to track down the fleeing killers and bring them to justice.

“The commissioner of Police Kaduna State Command is saddened by the ugly incident and vowed to bring the perpetrators to book.

“The CP also sympathizes with the families of the gallant officers who laid their lives for their country and pray for the repose of their souls.

“We are investigating the incident and the command will update the public in due course.” Said DSP Sabo.