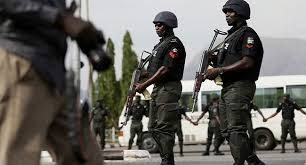 December 29, 2015 – 2 Policemen Attacked In Ebonyi While Trying To Arrest Suspect

2 policemen attached to Ebonyi State command were Tuesday hospitalized following injuries they sustained when they were attacked by a mob where they went to make arrest.

Also, they were dispossessed of their service AK-47 riffles by the mob.

The two officers whose names and ranks could not be immediately ascertained, it was gathered, were attacked at Amofia Ngbo, Ohaukwu local government area.

The officers had gone to the community to arrest a man who stabbed another man for demanding to be paid money owed him when they were surrounded by members of the community who refused to allow them effect the arrest of the suspect.

An eyewitness who did not want his name in print said that the policemen insisted that the suspect must be arrested and swooped on him.

Another source added that following the attack on the policemen by the youths, stern looking policemen in large numbers stormed the area in the late evening and started destroying things.

He disclosed that houses were razed in the alleged police reprisal attack.

He said the policemen attacked are responding to treatment and that their AK-47 riffles snatched are still missing.

Okafor added that some arrest has been made in connection with the incident.

Meanwhile, it was learnt that people have deserted the community.

Continue Reading
You may also like...
Related Topics:beaten, ebonyi, Policemen