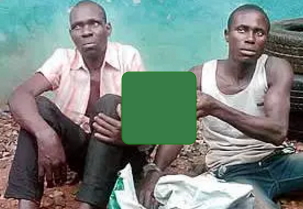 According to Oyo State Police Commissioner Adeoye Fimihan, the suspects were caught last week Tuesday the 29th of August 2017 around 1:02pm by a patrol team doing a stop and search operation at Agboro area of Ogbomosho Oyo road.

Adeoye said 2 severed human hands with gloves and a human head were found with the suspect riding a motorcycle.

He added that the suspects would be charged to court at the conclusion of investigation.