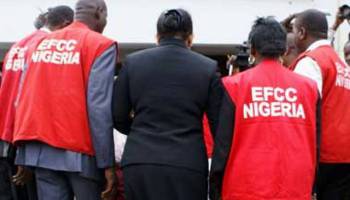 The FG has made public details of how two military personnel – Wing Commander Ishaka Yakubu and Lt.-Commander Akinbamidele Odunsi – worked with two bankers to allegedly divert N339m from the Military Pension Board (MPB) in February 2016.

The bankers’ are Mrs. Violet Ogoegbunam (the manager of a bank on Kuforodua Street, Wuse Zone 2, Abuja) and Mrs. Abidemi Aderemi Kolade (a relationship manager at the bank).

They were said to have diverted N339,374,478.58 from the MPB, under the pretext that the money represented payments to some “supposed next of kins to dead military pensioners as death benefits”.

Wing Commander Yakubu is said to be a cashier with the MPB. Lt.-Commander Odunsi is described as an Assistant Director, Computer, with the MPB.

This information formed the substance of a four-count charge filed on behalf of the Federal Government by the Economic and Financial Crimes Commission (EFCC) before the High Court of the Federal Capital Territory (FCT).

The charge, filed on May 31, 2017, was endorsed by Steve Odiase of the Legal and Prosecution Department of the EFCC in Abuja.

The two bankers with the United Bank of Africa are named in counts 1 and 2, relating to conspiracy and obtaining by false pretence in respect of the alleged N339,374,478.58 fraud.

Yakubu and Odunsi are named in the four counts, and charged with obtaining by false pretence, and abuse of office in respect of N190m which they allegedly received from the N390m.

It added that the offence of abuse of office by obtaining money by false pretenses in Count 4, was said to be contrary to Section 19 of the Independent Corrupt Practices and other related Offences Act, 2006 and punishable under the same section. [NAN]