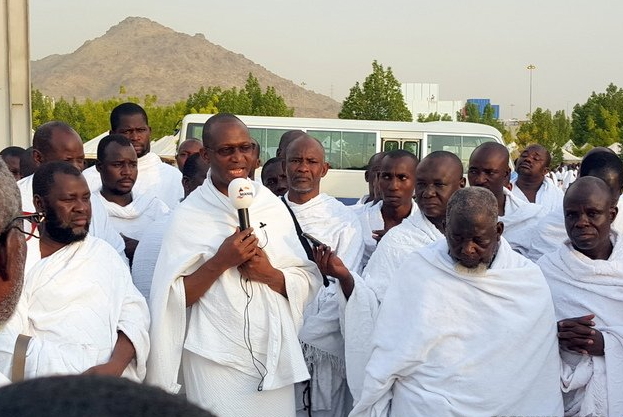 2 lecturers at UNILAG were among the lucky survivors of the tragedy that claimed over 700 lives in Mina last week.

Dr Ismail Ibrahim, a Senior Lecturer at the Department of Mass Communication and Acting Head of Actuarial Science Department, Dr Tajudeen Yusuf, were saved by their decision not to take a short cut back to their tent in Mina.

“We could have been victims of the stampede had we joined the bandwagon of those crossing to the route of those walking towards the Jamaraat. One of us suggested the idea of crossing because it would enable us to follow a short-cut and that would quickly take us to our tent. Fortunately, majority of us declined and insisted on following the normal route back home. Even though, our walk back home was a long one and we were very tired, the good news was that we got to our tent safely.”

Pilgrims in Tent ‘A’, did not want others to obstruct their movements and disrupt their he initiative is supported by comfort.

“We started the walk from Muzdalifah which covered a distance of about three kilometres to our tent in Mina. Immediately we got to Mina, we dropped our belongings and headed towards the Jamaraat.

“After walking for about one kilometre, the crowd was getting thicker. We later found ourselves stalked in the middle and our movement was getting slower. The reason for that was because; we had to make a detour to our right going down a tunnel. At this juncture, extra-care and caution were required because the spot was very slippery due to the staircase and narrowness of the tunnel. We did not know the reason for directing pilgrims to make a detour. We only got to know after the stampede that it was the pilgrims in Tent ‘A’ category that did not want others to obstruct their comfort, hence informed the no access movement for others.

“However, we managed to pass through the crowd without escaping the shoving, pushing and swinging aspects of the movement to the Jamaraat. We finally got to the Jamaraat successfully. In fact, all of us got to the edge of the Jamaraat and threw our pebbles with utmost ease. It should be mentioned that on our way to the Jamaraat, we saw some pilgrims who were obviously very fatigue. Some of them looked sick. Others were suffering from old age and sat by the side of the road trying to regain their breath. We availed ourselves of the opportunity of collecting bottles of water given out freely by the Saudi security officials. After exhausting our water, we also took water from the water dispensers placed along the road towards the Jamaraat. The strategy of drinking lots of water helped us greatly. It prevented us from suffering from dehydration while those who did not know the importance of taking lots of water became victims.

“The idea of trying to quickly go and come back from the Jamaraat is not peculiar to anybody. All the pilgrims usually have the same idea. So, we should be cautious and patient with one another. It is only the patient ones that will complete the rites; though it may take a long time to do that, but at the end of the day, one would have.

“Self-discipline is an important virtue that will ensure that pilgrims do not disobey the Saudi authorities, walk against the human-traffic, undermine the authority and rules put in place by either the host authority or the leaders of the delegations of the different countries in order to ensure a hitch-free Hajj. Each country should raise the awareness bar concerning the rigorous nature of some of the aspects of Hajj rites especially the Jamaraat, Tawaf Ifadah and Sa’y of Tawaf Ifadah among others,”.