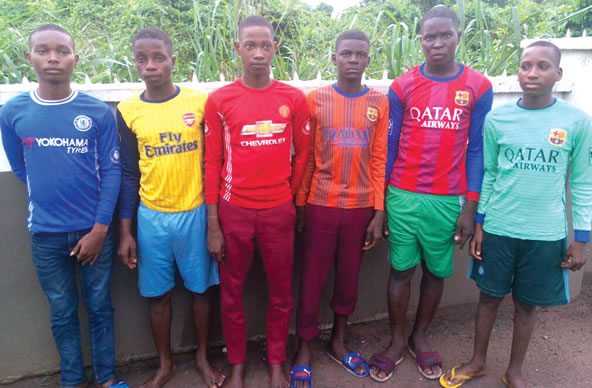 The six kidnapped students of the Lagos State Model College, Igbonla, Epe, said they were tortured during their 65 days in captivity, according to two of them yesterday.

They were released on Friday through the combined efforts of the security agencies and Governors Akinwunmi Ambode of Lagos State, Rotimi Akeredolu of Ondo State and Ifeanyi Okowa of Delta State.

“We were blindfolded, kept under the bridge with our legs tied. They fed us eba and crayfish soup,” one of the students (name withheld) told The Nation.

And they were given ‘reddish water’ to slay their thirst, he said.

Yusuf Farouk, Isiaka Ramon, Pelumi Philips, Peter Jonas, Adebanjo George and Judah Agbaosi were abducted from their hostels- Yellow and Green houses- on May 25 by gunmen clad in police uniform.

The maltreatment soon took a toll on them with two falling ill: they bled from the mouth.

The victim said their abductors routinely beat them and left them in the open, day and night.

Their only shelter was a bridge. But then they had no blankets or additional dresses to shield them from the elements.

He said: “They were beating us. They fed us with eba and crayfish soup. They mixed the crayfish with pepper and water and then gave us to eat with eba.

“They were giving us red water to drink. The water had a bad taste but no odour. It was polluted. They kept us under a bridge. They gave us no bed sheets or blankets.”

Their only wears all through were the dresses they had on when they were abducted and the replica jerseys provided by the kidnappers.

That was what they wore into freedom on Friday.

“They were the ones who gave us the replica jerseys,” he said.

The student is now “fine and happy” to be back home with his family after all the trauma.

“I have done my medical check up. I am fine and happy to be home with my family,” he said and paused, his mood changing immediately.

That ended the conversation at the discretion of his interviewer.

A second victim (name also withheld for security reasons) said they changed camps thrice during their captivity, enduring starvation at some point.

One of the camps was made of cut trees and the kidnappers had to erect a tent to shield them from rain.

As time went by the kidnappers allowed the boys to prepare their food, and move around, he said.

There were open displays of emotion on Friday as the parents of the pupils of the Lagos State Model College, Igbonla, Epe, who were abducted on May 25, 2017, reunited with their children following their release after 64 days in captivity.

The pupils arrived at the Lagos State Deputy Governor’s office in Alausa, Ikeja from Ondo State around 9 pm.

According to a source, the fresh payment of N5million brought the total ransom paid to the kidnappers to N37m.

Twenty suspected kidnappers of the pupils were killed in gun duels with security operatives in the events leading to the release of the pupils on Friday.

It was learnt that one civilian volunteer (local vigilante), who fought on the side of the security agents, was also killed, while eight policemen and four other volunteers sustained injuries in the shoot-outs.

The police said one of the members of the kidnap gang, who collected ransom on behalf of the gang, was also arrested.

The Commissioner, Lagos State Police Command, Fatai Owoseni, said 20 members of the gang involved in the abduction of the pupils were killed in gun duels with security operatives.

He said two of them were ringleaders identified as Bright Adeniyi and Oniwe Iyelabo, aka America.