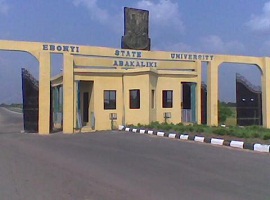 A student of Ebonyi State University, Abakaliki, Miss Miracle Eze was found dead, naked in her hostel room at the Ishieke campus of the institution.

The deceased, who was in her second year in the Department of Mass Communication, hailed from Nsukka in Enugu State. She was said to have died mysteriously in her room, nude.

Her hostel mates found her lifeless body in her room at Henriv Hostel the next day when one of them noticed that she had not come out of herroom later in the day. On inquiry after knocking on her door and there was no response, she found out that it was locked from inside.

The situation, according to the source, attracted the attention of other students, and the police who later forced the door open and found her lifeless body on her bed.

“While I was with her, the same Mohammed came in and she left for her room. The following morning as I was preparing for school, I knocked on her door but nobody responded. I thought maybe, she was praying and I left for my exam.”

Other residents of the hostel told Daily Sun correspondent that they sensed something was wrong when they noticed that the girl’s door was still locked from inside until in the evening when they raised the alarm and knocked hard on the door but to no avail.

The students stated that it was when they called her phone and it rang but was not picked, that they peeped through the widow and saw her body on her bed, dead and naked.
The police at Ishieke later deposited her corpse in the mortuary while further investigation continues.