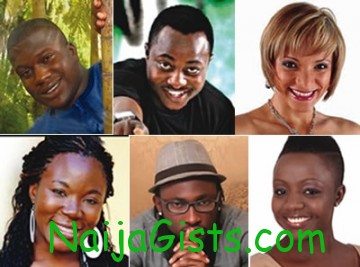 LIFE&BEAT takes a look at some past contestants in the Big Brother Africa TV reality show, ahead of the 2012 edition. naijagists.com

Bayo Okoh was the first Nigerian to participate in the Big Brother Africa TV reality show. He appeared in the first edition of the event, but ended up with a dismal performance. It did not come as a surprise to many Nigerians that his name came up for eviction barely halfway into the show.

Okoh never imagined that he would be treated to a warm reception when he arrived in Nigeria after the show. He became an instant superstar, but it was short-lived. After the memories of the BBA 1 faded in the minds of many, not much was heard of the Nigerian housemate.

Kevin Pam, a native of Jos in Plateau State, did not only win the 2009 edition of BBA, he walked home straight from the studio with a wife in tow!

Pam married fellow housemate, Elizabeth, from Tanzania. Both of them were blessed with a baby girl a few months ago.

Eventually, he made an effort to venture into music. So far, he has not been successful.

Pretty Angolan Tatiana Daro contested twice–in BBA 2 and BBA 5. Although she failed to emerge winner in both shows, she became instantly popular with youths around the continent. One of the fallouts of her participation in the reality show was a role in a Nollywood movie. But even that failed to give her a much-needed break.

A native of Delta State, Ofunneka Molokwu played the good girl in BBA 2 and almost maintained the role till the end of the show. But an alleged sex scandal in the house, perhaps, ruined her chances of bringing home the prize money. Contrary to expectations, that scandal didn’t ruin Molokwu’s life.

She came back after the show, appeared in one or two Nigerian movies, which didn’t quite fulfill her immediate aspiration, before she found love and got married to a medical doctor, Chika Anyanwu.

Richard, a Tanzanian apparently forgot his wife when he came into the house in BBA 2 and started an affair with fellow housemate, Tatiana. But contrary to what most viewers expected, Richard did not only end up winning the show, he returned to his wife, made a successful entry in the movie industry in his country He is now a father.

Meryl, from Namibia, and Mwisho, from Tanzania, were both housemates in Big Brother 5 (All Stars edition). None of them became the eventual winner, but they got more than they expected. They found love, got engaged in the house and eventually got married in Namibia.

As a model, actor, presenter and master of ceremony, Nwachukwu is gradually worming his way into the club of big time celebrities in Nigeria.

The Nigerian contestant in BBA 6, Vina was not as popular as her fellow Nigerian housemate, Karen, who eventually won the show. But Vina eventually emerged in the final.

Currently a presenter with a popular radio station in Nigeria, she has not turned to a big time celebrity yet. But LIFE&BEATgathered that she had a brief stint with music.

If stardom and riches were easy to come by, perhaps, only a few people would have turned up at the Protea Leadway Hotels in Maryland, Lagos, to be auditioned for a place in the seventh edition of the Big Brother Africa reality TV show.

But an enormous crowd attended the audition. It seemed that the majority were particularly attracted by the prize money, which was recently increased from $200,000 to $300, 000.

The organisers have said that the housemates would play the game in pairs. Intending housemates are expected to pair up with either friends, relations, spouses, or anybody they wish to take along to the house.

Organisers of the show have received the largest number of entries ever recorded from all the participating countries in Africa since the inception of BBA.

The Lagos audition had its funny and dramatic dimension. Many of the ladies who attended the event brazenly flaunted ample bosoms.

Quite conscious of their endowments, especially in the upper region, they had no qualms displayed their assets and cat walking in such a way as to attract the attention of the judges.

The cynosure of all eyes at the event was May Blosson, a woman old enough to be a grandmother. She had paired with her nephew for the auditions hoping to get the gold ticket as a result.

Madam Blossom, who claimed to be an herbalist, said she wasn’t bothered that much younger people had turned up for the audition.

She says, “I don’t have any problem being seen here. I came here to be chosen. I like to keep my life simple. And that was why I agreed when my nephew, Munachim, dragged me to be a part of this audition.”