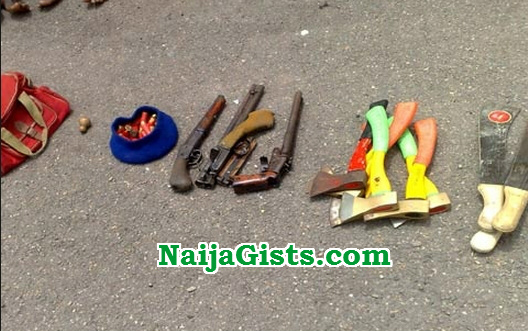 The plea of the accused was not taken, while Magistrate Olalekan Ijiyode, asked the defence counsel, Mrs Olubunmi Salawu, to come up with written application for bail.

Ijiyode also ordered the prosecutor to duplicate the case file forwarded to the State Ministry of Justice and ordered the remand of the accused persons.

The case was adjourned till March 23 for hearing.

The prosecutor, Insp. Emmanuel Abdullahi had alleged that the defendants committed the offences on Sept. 28, 2016, at about 12:30 a.m. at Oke-Atan Area in Ile-Ife.

Abdullahi said that the accused persons conspired within themselves to commit felony to wit: housebreaking, stealing and paraded themselves as members of the black axe secret cult.

He added that the accused conducted themselves in a manner that breached the peace of the community, armed themselves with an axe and resisted arrest by the police.

According to him, the accused assaulted one Rafiu Abodi, by using their UTC knife to inflict injuries on him.

Nigerian Man Breaks Up With Girlfriend With Bad Attitude And This Happened
Wife Of Chuks Okebata, US-Based Nigerian Assassinated In Imo State Speaks