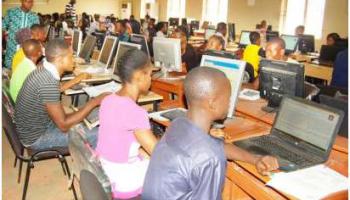 Some fraudsters who called themselves education consultants have been arrested for duping University admission seekers in Ado Ekiti.

The suspects were caught at a cybercafe along Secretariat Road in the State capital yesterday.

Ekiti state Joint Admission and Matriculation Board administrator, Mr Dele Onileowo warned admission seekers that the official form was yet to be released.

Photos: Nigerian Actress Stephanie Chijioke Delivers Baby Boy
Obasanjo Says Igbo Should Be Made President In 2019 In The Interest Of Justice & Fairness