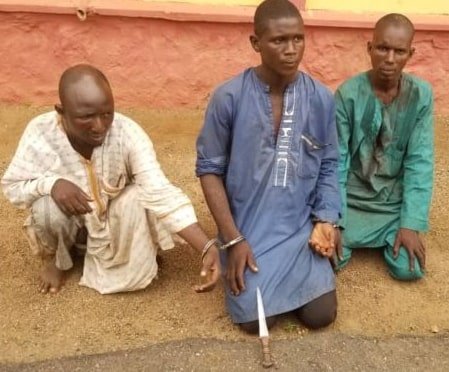 The suspects were said to have allowed their cattle stray into the farm of the deceased thereby destroying his crops, an action Sowemimo protested.

He was said to have accosted the herders, querying their destructive attitude which led to an altercation.

Angered by the confrontation, the herders were said to have stabbed Sowemimo dead.

Confirming the incident, police spokesman Abimbola Oyeyemi, a Deputy Superintendent (DSP) said the command received a distress call to the effect from villagers and deployed officers to the scene led by the Deputy Commissioners in charge of Operations and State Criminal Investigation and Intelligence Department (SCIID).

“With information from the natives, they were able to arrest the three herders who perpetrated the heinous crime.

“The Commissioner of Police Bashir Makama has been to the village to condole with the family of the victim. He ordered the transfer of the suspects to Homicide Section of the SCIID for proper investigation and prosecution,” said Oyeyemi.