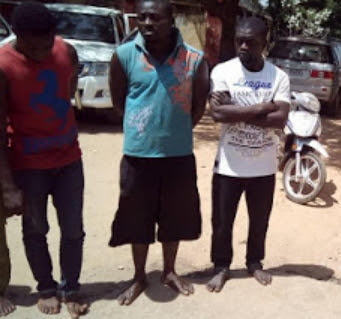 3 young men who allegedly beat up a man they falsely accused of taking the private part of one of them, on Wednesday appeared before an Ikeja Magistrates’ Court.

The police arraigned Salihu Bala, 20; Masahudu Abubakar, 20; and Alhasan Mohammed, 20, on a three-count charge of conspiracy, assault and breach of peace.

The young men whose addresses were not disclosed, assaulted one Mr Gbenga Afuye on Sept. 25 at Ogba Bus-Stop in Lagos, according to the prosecutor, Insp Victor Eruada.

‎“They descended on Gbenga Afuye by giving him punches and inflicting injuries on his mouth.

“People around rescued Gbenga from the accused and reported the case to the police, and they were arrested,” he told the court.

The teenagers, however, pleaded not guilty and were granted bail by Magistrate G.O. Anifowoshe in the sum of N50,000 each with two sureties in like sum.

Anifowoshe ordered that the sureties must be blood relations of the accused and should provide evidence of tax payments to the Lagos State Government.

The magistrate adjourned the case until Nov. 7 for mention.