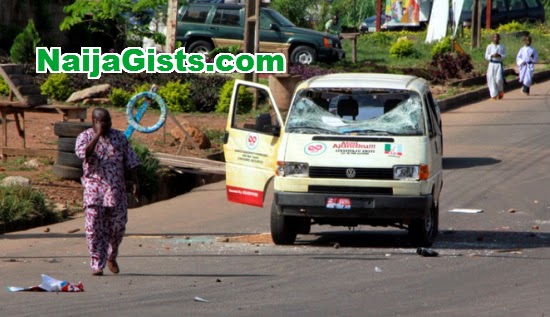 Some hired political thugs suspected to be members of Peoples Democratic Party have unleashed terror on members of the opposition party, APC in Ekiti state.

The thugs reportedly sent by Ekiti State Governor attacked APC members on Friday in Gbonyin, and Irepodu, Ifelodun LGA of the state leaving blood and destruction on their trail

This is what APC spokesperson for Ekiti state, Taiwo Olatunbosun said about the attack:

“They started their raids from Ijan-Ekiti where they shot sporadically in the air. Residents scampered to safety as thugs went about destroying APC candidates’ billboards and posters.

“After Ijan-Ekiti op­eration, they headed for Iluomoba-Ekiti where APC ward meeting was disrupted. Billboards and posters of APC candidates, including the chairs and tables were destroyed before moving to other communities in Gbon­yin to unleash violence,” Olatubosun explained.

“It was during their night visit that these men in mili­tary uniform abducted Chief Peter Akinsola a.k.a Pitoro, the senior brother of the Ward Chairman, Mr. Olusola Bello, Mr. Olujimi Ogunade, and 22-year-old Adefemi Ojo. Investigation has re­vealed that the abducted men are illegally detained at Fay­ose’s task force office along Iyin road Ado Ekiti,” Olatu­bosun explained.

He listed PDP members seen working with the thugs as Folorunso, Niran, Ba­siru Ajagbemokeferi, Ropo Akosile, Tosin, alias Tosco (a notorious criminal), Dada Fagbolagun and Michael Daramola, who was the Gov­ernment House driver who drove the thugs to the town.

Olatubosun added that Ajayi Temisoro was match­eted while a pharmaceutical shop belonging to an APC member, Olujimi Ogunade, was destroyed. A high Chief in the town, Chief Tunji Agamogo, the Onisara of Igbemo as well as one Ariyo Afao a brother to Governor Fayose were seen with the governor’s thugs encouraging them and pointing to APC members houses.

Ekiti’s crime rate has increased less than a year after Fayose was sworn in. It is a pity that the honourable people of Ekiti state chose this kind of man to lead them.