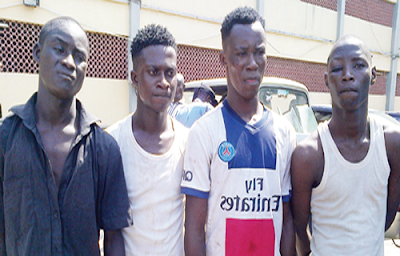 4 suspected members of the Eiye Confraternity were on Friday arraigned at the Ikorodu Magistrates’ Court in Lagos State.

They are facing a two-count charge of conspiracy and belonging to a secret cult.

The prosecutor, Sgt. Bosede Adegeshin, told the court that the accused with others at large committed the offences on May 22 at Aina Folabi Street, Lowa Estate, Ikorodu, at 11.42 p.m.

“The accused and their accomplices, who are yet to be arrested, belonged to an unlawful society called ‘Eiye confraternity’.

“They were caught during their meeting in the area following a tip off,’’ Adegeshin told the court.

The accused pleaded not guilty to the charges.

The Magistrate, Mr. E.O. Ogunkanmi, granted each of the accused bail in the sum of N100,000 with two sureties.

Ogunkanmi said one of the sureties must be blood relations of the accused, while others should be civil servants, whose tax payment to the Lagos State Government should be verified.