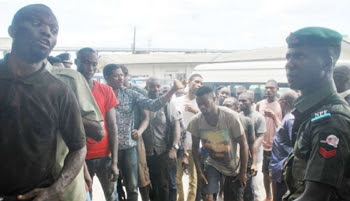 In a statement Friday by the police through the state police public relations officer PPRO princess Nkeiruka Nwode and made available to reporters, said the group remained a terrorist group.

Items according recovered according to Nwode, included; Biafran flags, two metal gongs, four motorcycles, one Suzuki bus among other things.

“Following the declaration of IPOB as a terror organization by the Federal Government on 20th September, 2017 and as part of the concerted efforts of the Anambra State Police Command to rid the State of Criminal elements”

“Therefore the Command wishes to let the general public know that Ipob activities is a treason offence (i.e) Treasonable Felony and also assures the Law abiding citizens in the State of adequate Security”

“The Command, finally wishes to advice the parents to warn their children and wards to be mindful of their activities and report to the Police of their suspected activities, promptly”.