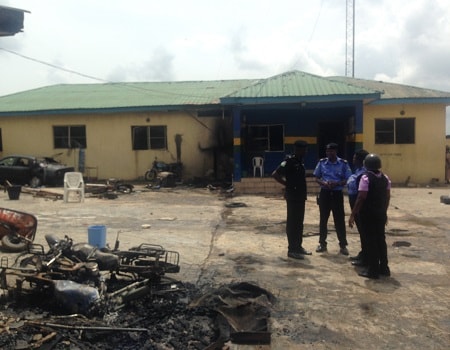 By Yinka Adeniran, The Nation

At least 4 people died on Thursday with many others reportedly injured during a protest between members of the National Union of Butchers (NUB) at the popular Bodija Market in Ibadan, the Oyo State capital, and security operatives on the relocation order issued to the butchers by the state government.

Also, a police station inside the market was razed by the protesters.

Five vehicles parked inside the police station were burnt while three others outside the premises were vandalised.

The state government immediately ordered an immediate closure of the market until further notice. Trouble started when butchers allegedly confronted the policemen deployed to enforce a court order for sealing off the Bodija abattoir.

This led to the mayhem, which grounded business activities in the market.

The government, having completed a modern abattoir at Amosun village in Akinyele Local Government Area, had ordered the butchers in the capital city to relocate to the new facility.

It also withdrew the licence of existing abattoirs in Ibadan.

The refusal of some of the butchers to comply with the directive propelled the government to secure a court injunction sealing off the Bodija, Aleshinloye and Sango abattoirs.

But butchers at the Bodija abattoir were said to have ignored the court order and continued their activities.

Also, the state government yesterday shut down Bodija Market for “security reasons”. The government said it took the action following sporadic shooting yesterday at the market and its environs.

The council chairman said it was also meant to guard against the escalation of the violence in the market to other parts of the state.

Oladeji said security agencies had been briefed about the situation in the market to maintain law and order.

He urged the residents to be law-abiding, warning that anyone found to constitute a threat to security would be made to face the full wrath of the law.