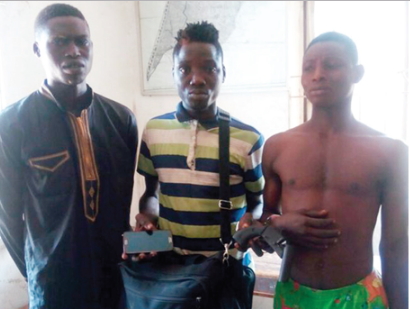 The suspects confessed to be a fourmam gang of robbers. Police are still hunting for the fourth member.

The gang’s modus operandi is to disguise as commercial motorcycle riders. When an intending passenger approaches them, they would pounce on the person and rob him or her. The operational motorcycle of the gang, a Bajaj, has been recovered from them.

The suspects were arrested by operatives attached to the Dopemu Police Station, while on patrol duty. The policemen sighted the suspects, robbing a victim, Emmanuel, at gunpoint.

The operatives swiftly moved to the scene; on sighting the policemen, the suspects took to their heels. The policemen chased and arrested Owolabi.

The Automatic Teller Machine (ATM) Card and phones, belonging to Emmanuel, were found in Owolabi’s possession. A double barrel pistol, used in the robbery was also recovered from him. Owolabi led detectives to their hideout where two more suspects were arrested.

Badmos said: “Efforts are on to arrest the other gang member, who is still at large. The three suspects have been transferred to the Special Anti-Robbery Squad (SARS), Ikeja, for discreet investigation.”

Badmos advised members of the public to be vigilant whenever they wanted to mount motorcycles. She noted that investigation has revealed that most commercial motorbike riders used such guise for nefarious activities.

Continue Reading
You may also like...
Related Topics:gang, okada, robbers