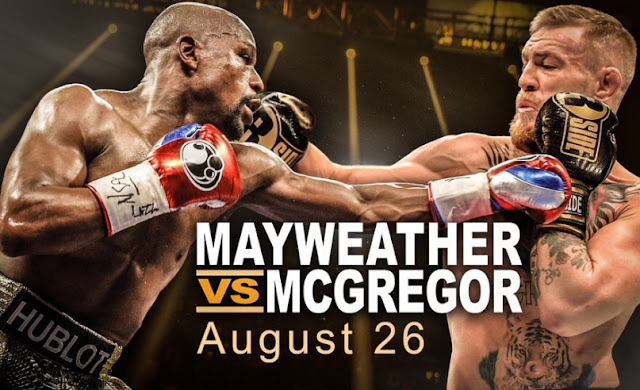 American boxer Floyd Mayweather has claimed he’s not the same fighter he was two years ago — and believes Conor McGregor has the advantage going into their showdown this month.

Mayweather, an undefeated former five-weight world champion, takes on the Irish UFC star at T-Mobile Arena in Las Vegas on August 26 in what is expected to be one of the richest fights in combat sports history.

The pair traded insults and threats during a four-city publicity tour last month and the American 40-year-old also recently vowed to knock McGregor ‘the f*** out’.

Floyd Mayweather believes Conor McGregor has the advantage going into their showdown
However, Mayweather — whose last fight was a win over Andre Berto in September 2015 — has conceded that McGregor, 29, has age and height on his side.
He told ESPN: ‘He’s a lot younger. When you look at myself and Conor McGregor on paper, he’s taller, has a longer reach, he’s a bigger man from top to bottom.

‘A fighter like Andre Berto isn’t even supposed to go the distance with Floyd Mayweather, but remember, I was 38.

‘It’s obvious I’m slipping a little bit to even let a fighter like that go the distance with me. I’m not what I used to be.’

The two fighters have been trading insults relentlessly ahead of their showdown this month
Mayweather is a heavy favourite for the fight, winning all of his 49 professional bouts. McGregor, meanwhile, has never boxed professionally.

And the American boxing legend has promised an entertaining fight, having learnt from his underwhelming performance in the victory over Manny Pacquiao.

He added: ‘This can’t be a defensive fight. I have to go to him. I owe the public because of the Pacquiao fight. They weren’t pleased with that. They’re gonna be pleased with this fight here.’’

Continue Reading
You may also like...
Related Topics:knock out, Mayweather, mcgregor