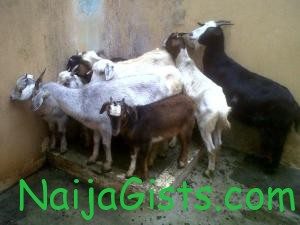 The unusual and the unexpected happened in Osun State last Tuesday when an agency of the state government, the Osun Waste Management Agency (OWMA) arrested and detained five goats. The goats were detained for allegedly roaming around the Dele-Yesa area of Osogbo, the state capital.

The action of the agency was described as uncommon in the history of the 22 year old state, as it has never been recorded that animals in the past were arrested either by the Police or any agency of the state government. The arrest was for violating the state environmental laws which prohibit rearing of pet animals in residential areas.

They were thus detained at the custody of OWMA at the state headquarters of the agency located at the Gbongan/Ibadan road, Ogo Oluwa, Osogbo. Sunday Sun learnt that three of the animals spent five days while two spent more as their owners did not show up in time to claim them. The agency believed that even though goats are lesser animals, they should not urinate or defecate within the residential premises, and the offences the animals committed “knowingly” or unknowingly, ran fowl of the provisions of the state laws.

Article 101, cap 2 of the 2002 Laws of Osun State states that “No bird or animal shall be allowed to stray to any road or public place or urinate or defecate in any public place in the state.” It is the section of the laws of the state the goats violated, hence their subsequent arrest and prosecution by the agency of government responsible for sanitation and environmental protection in the state.

The goats, according to the Director of Environmental Management and Sanitation in the state Waste Management Agency, Mr. Henry Ogunbanwo were arrested in the early hours of the day by officers of the agency who stormed the area to inspect the level of compliance of residents of the area to earlier instructions to keep their goats and other pet animals in the cage.

The goats who fell victims of the government’s policy were arrested after they had defecated and urinated in the presence of their owners. Ogunbanwo who said his agency had earlier carried out a sensitization programme to the entire nook and cranny of the state, said the goats were taken to the agency’s office where they were fed and properly taken care of, stressing that the officers of the agency understand what it takes to take care of animals, hence the best care was given to the animals outside the custody of their owners with proper diet of foods provided for them, courtesy of the agency.

It was gathered that the officers of the agency actually provided foods for the goats while in detention but the animals did not eat the foods well as they were tied down in the detention and denied access to natural food, even as they were denied right to free movement which the animals enjoy most. The five goats were tied down separately and continued to make serious noise in their detention until their owners appeared.

In a critical study of the animals at their detention, the animals, though given food as and when due did not feel comfortable as their noise kept disturbing activities at the OWMA’s office. Sunday Sun reports that the animals thus became the cynosure of every individual that entered into the premises of the office. However, the goats shouted each time they saw their owners who came intermittently to make case for their release until they were asked to pay a fine of N10,000 which the laws prescribed for the offences committed by the goats.

Ogunbanwo who is also the state President of the Environmental Health Officers Association of Nigeria disclosed that the agency was acting in line with the provisions of article 101 of the 2002 laws of Osun state which prohibits rearing of animals in residential areas, adding that the agency has the backing of the court. The OWMA boss who hinted that a court of competent jurisdiction had empowered the agency to arrest any stray animal roaming around residential areas within the state noted that some owners of the arrested goats had approached the agency to claim their goats, but the agency could not release the goats to them as they failed to produce evidence of payment of their fines. He insisted that owners of the animals were compelled by law to pay the prescribed fine or forfeit the ownership of the goats.

He disclosed that the goats would be sold to interested members of the public should the genuine owners fail to show up within the stipulated time with the proof of ownership and evidence of payment of fine with the money for the feeding of the animals. One of the owners of the detained goats who spoke at the premises of the OWMA Office, Mrs Sherifat Babalola said “it is unfortunate that we have to pay that much to claim our goats back. I am not aware of any law guiding rearing of domestic animals in the state until the very day my goats were arrested.

The N10,000 to pay is too much as my two goats that were arrested were not even up to N5,000 if I’m to sell them and now I will have to pay N10,000 for just one goat. Since the arrest of the animals, people rearing animals in the state are more careful as pet animals are now prevented from roaming major parts of the state, especially Osogbo, the state capital where the first set of victims of violators of the environmental laws were arrested.