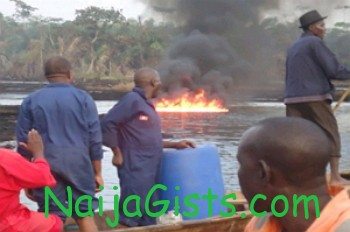 Disaster struck early yesterday morning at Arepo Village, Owode in Ogun State when a fire outbreak roasted no fewer than 30 suspected vandals allegedly siphoning petroleum products from a ruptured Nigerian National Petroleum Corporation (NNPC) pipeline. Sunday Sun learnt that the fire which started at about 2am was sparked off by vandals who were arguing over who is eligible to fetch from the ruptured pipeline.

It was in the heat of the argument that one of them accidentally released a bullet that led to several explosions. However, operatives of the Inspector General of Police Special Task Force on Anti-Pipeline Vandalism Unit, Force Headquarters Annex, Lagos, who were on patrol rushed to the scene to avert further disaster. Sunday Sun learnt that it was in the process that they arrested a medical doctor, Dr Adegboyega (first name withheld by us) and one of the survivors Sunday Reuben on their way to the hospital.

Dr Adegboyega was alleged to be smuggling one of the survivor, who happens to be a vandal to his private clinic for treatment. Confirming the arrest, Assistant Commissioner of Police, Friday Ibadin, who is in charge of the Task Force, said that the explosion started at about 2am on Saturday. “Shortly after the explosion, policemen led by Sector Commander, Lagos, DSP Onaghise Osayande, cordoned off the area to reduce casualties while they awaited the arrival of fire fighters to put out the fire.

It was in the process that they stumbled into a jeep carrying one of the survivors and a medical doctor who was on his way to the hospital. In the course of interrogation, we discovered that the survivor was one of those who participated in the killing of those NNPC officials last year. “Sometime in August, 2012, there was a firebreak which was caused by suspected vandals who burst the pipeline to siphon petroleum products at Arepo Village.” Ibadin said: “Fire fighters are on the ground while we have provided adequate security for any unforeseen attack.

Meanwhile most of the survivors are on the run knowing full well that they are criminals. Reuben is currently receiving treatment in an undisclosed hospital”. Groaning in pain, Reuben sobbed that so many of them who were blown away by the explosion where still alive and dying. In his words: “I was in my house when Suleiman my friend called me that there is a job at Arepo creeks.

He asked me to look for a canoe and come with as many gallons as I can carry. Shortly after I arrived, I saw people arguing while some were fighting before I heard a gun shot. The next thing was an explosion. I was lucky that I wasn’t close to the ruptured pipeline. It was the heat of the fire that affected me. I managed to run to my boat where my mother was waiting. Iya Olabode, our neighbour called a doctor who was about taking me to the hospital when we were arrested by the police.” When asked the number of persons at the creek, Reuben said: “There are so many of us both men and women.

We are more than 30 persons over there and most of them are still inside that fire. Most of them are still in the creeks dying, please help them.”’ Meanwhile, the medical doctor, Adegboyega who is currently battling to exonerate himself insists that he was simply acting according to his oath to protect life. He claimed that he was invited by a customer, Iya Olabode to attend to a patient in her house at Abule Oba, Ikorodu area of Lagos. “I have been a family doctor to Iya Olabode for the past three years.

So when she called me that there is an emergency, I quickly rushed to her house where I saw Reuben badly burnt. I advised her that we should take the man to my clinic for better treatment. We were on our way when the police accosted us”, the doctor explained. Sunday Sun reports that Doctor Adeboyega was given an opportunity to call Iya Olabode to help vindicate him but he got the shock of his life when he called Iya Olabode on phone to come and help him.

It was gathered that her reply was: “Doctor, I don’t know what you are talking about. I only asked you to come and treat a patient and make money. You want me to come and also be arrested because I allowed a pipeline vandal to stay in my house”. Iya Olabode later switched off her phone. Meanwhile, scarcity of fuel looms in Lagos and Ogun state as NNPC has since stopped the flow of PMS through Arepo pipeline pending when the ruptured pipeline would be repaired.

When contacted, the Information Officer of the National Emergency Agency (NEMA), Mr Ibrahim Farinloye told Sunday Sun that only the agency and the NNPC knew the exact route to the scene of the fire, adding that none of the two outfits could access the area as at yesterday evening.

He said that the exact number of casualties was yet to be ascertained and hinted that NEMA and the NNPC would visit the scene of the fire today at about 9 am for accurate assessment of the incident. He said that the supply from the area had been stopped to,“suffocate the fire.” The NEMA spokesman appealed to Nigerians to see oil pipelines as their property and protect them against vandals pointing out that the same pipelines had been vandalized about four times.

Man Arrested For Raping Chicken To Death In Zimbabwe
5 Goats Arrested In Osogbo Osun State Still In Detention; To Be Sold For Fine Payment