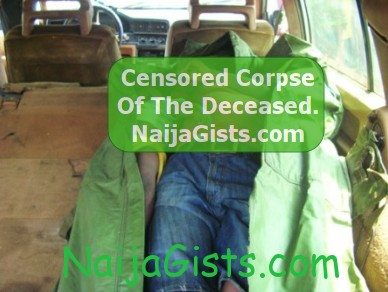 The cause of death of five members of a family in Robiyan, Ijoko, Ifo Local Government Area of Ogun State, southwest Nigeria, has been revealed.

P.M.NEWS gathered that the victims and other members of the family had a party on Wednesday, a day after the New Year during which they ate rice and even served their neighbours.

Unknown to them, death was lurking around the corner. Investigations revealed that they went to bed with the generator, which they kept in the verandah, on. Initially, there was suspicion that the victims might have died as a result of food poisoning but it was discovered that they must have died from fumes inhaled from the generator.

The following day (yesterday), an 80-year old woman, Madam Kuburat, and two of her grandsons, were found dead and foaming in the mouth.

It was gathered that two members of the family rushed to the hospital also died.

The Baale of Robiyan, the traditional chief, Olu Kujore, told P.M.NEWS that he ordered that the door to the house be forced open when he learnt that some people were trapped inside.

“Around 6 a.m. some boys came to inform me of the incident. They said they could not open the door because it was locked from behind. I followed them there and we forced the door open to find three people dead.

“It is sad to learn that two of those rushed to the hospital also died,” he said.

A tenant who recently moved into the house narrowly escaped death because she took her son who was ill to the hospital on the night of the incident, a resident further told P.M.NEWS.

The police from Ogun state Police Command, Eleweran, have commenced investigation into the tragic incident.