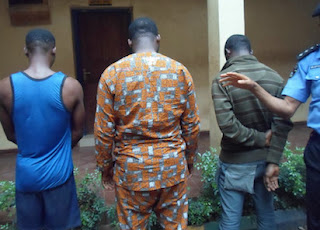 Nov 3, 2017 – 5 Policemen Who Aided Escape Of Murder Suspect & 3 Others Arrested In Ebonyi

5 policemen in Ebonyi have been arrested and placed on Orderly room trials for allegedly aiding the escape of a murder suspect, one Ogonna Alioka aka “Pilot” and three other suspects of various offences from the Police Cell in the state command.

The state’s police Commissioner Titus Lamorde told journalists in Abakaliki that the Ogonna was one of the fifteenth suspects arrested for their role in the abduction and murder of one Mrs Chukwu Okorie.

He said the victim was kidnapped on January 8, 2017 in her home at Egba Amanye community in Ivo LGA of Ebonyi state and was murdered and buried in a shallow grave at Lopkpanta forest in Abia state.

“After his arrest, Ogonna was helping the police to arrest the two other gang members but unfortunately, on the night of October 22, policemen of the state CIID on Cell/Counter duty negligently allowed the escape of kidnap suspect, Ogonna Alioka and three other suspects of various offences”, the commissioner said

Mr Lamorde said all the policemen on Counter duty on the day the suspects were arrested, detained, defaulted and tried in an orderly room.

Continue Reading
You may also like...
Related Topics:ebonyi, Policemen, suspects