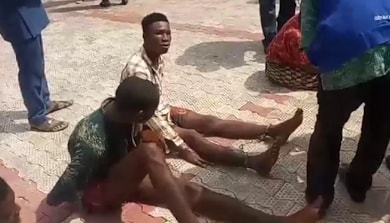 7 suspected armed robbers operating as commercial drivers have been arrested in Anambra State.

Among those arrested were Chigozie Ojemere and Izuchukwu Okafor.

The suspects were apprehended on Monday along Onitsha-Owerri Road in their operational L300 bus marked AWK482ZD.

According to the spokesman for Anambra State Police Command, Mohammed Haruna, a Superintendent of Police (SP), the suspects were caught during stop-and-search duty by operatives of the highway patrol team.

“After a thorough search on the vehicle, the following exhibits were recovered: One locally made cut to size double barrel gun, seven live cartridges and seven handsets of different brands.

“On the same day, a suspected phone/bag snatcher was arrested around 10:00 p.m. by patrol team attached to Awada, Onitsha. The suspect, Obinna Nwonu, 23, of New Site, Oba Village, attacked one Blessing Nwafor, a female and dispossessed her of phone and other valuables.

“Both cases are under investigation and would be charged to court upon completion.”