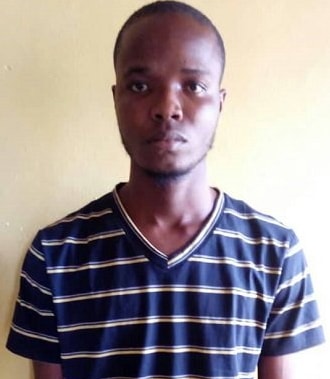 Asabor, it was gathered, posed on Facebook as the Senator representing Anambra South district and fleeced job seekers wishing to get employment with the Nigerian National Petroleum Corporation (NNPC).

It was gathered that the suspect was trailed to Oghara, Delta State, where he was apprehended on Monday.

He reportedly opened a Facebook account with Ubah’s picture, where he had private chats with job seekers and demanded they paid certain amount of money to get their dream jobs.

The suspect’s arrest followed a petition by one Charles Asugha on behalf of a victim, Chinelo Nnedimma, who lost N300, 000 to the fraudster.

After paying N300, 000 to the suspect’s First Bank account and the job was not forthcoming, the victim was directed to contact a supposed lawmaker, Nkiruka, for further discussions on the matter.

A source said the victim was swindled in December last year, adding that police only got involved in the matter after the petition.

“The victim paid N300,000 through the First Bank account of Asabor Joel (3069996606). She was promised employment in NNPC. But after collecting the money, he started playing pranks with the victim. He gave the victim the mobile number of a certain lawmaker, Hon. Nkiruka, which was another ploy to swindle the victim more.”

Continue Reading
You may also like...
Related Topics:andy ubah, impostor