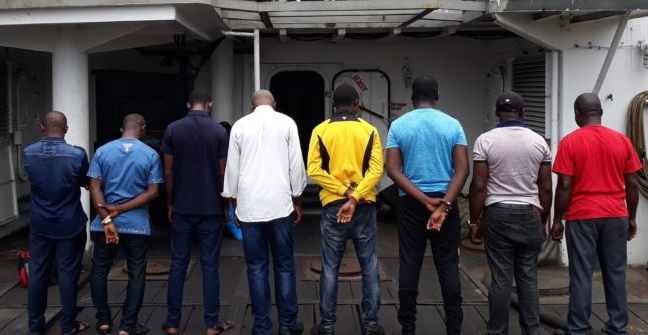 The Nigerian Navy has arrested seven men for allegedly transporting 522 tonnes of diesel believed to be stolen from pipelines, an official said on Wednesday.

Capt. Victor Choji, the Executive Officer of the Nigerian Navy Ship (NNS), Pathfinder, Port Harcourt, told newsmen in Onne, Rivers, that the suspects were arrested on board a vessel, MV Mac Clint.

He said that the seizure was part of the ongoing clampdown on illegal refineries, illegal bunkering, sea piracy, robbery and pipeline vandalism in Rivers and its environs.

“In furtherance of our campaign against all forms of illegalities within Rivers State maritime environment, one of our patrol elements on Nov. 22, intercepted a vessel, MV Mac Clint. 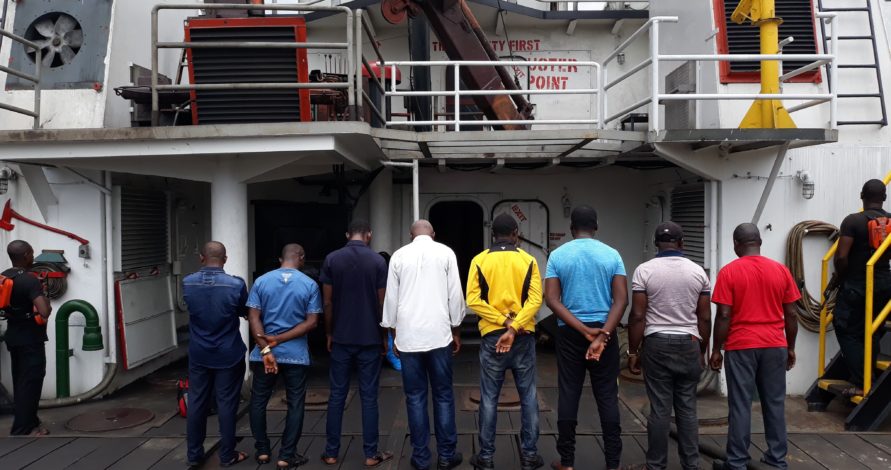 “The vessel was caught transporting 522 metric tonnes of diesel around Okono oil field without clearance to move the product.

“MV Mac Clint, suspected to be involved in illegal bunkering activities, had seven all-male sailors of Nigerian nationality on board.”

Choji said that NNS Pathfinder would not rest on its oars until it puts criminals operating within Rivers and its environs out of business.

“We are committed to doing this so that we can encourage and create a conducive environment for lawful social and economic activities to thrive within the state and environs.”

Choji said the Navy had concluded its preliminary investigation, and that its findings showed that the product was allegedly stolen from an undisclosed location.

The executive officer handed over the vessel, product and suspects to the Economic and Financial Crimes Commission (EFCC) to carry out further investigation on the matter.

A senior detective of the EFCC, Aminu Ismaila, said the commission would conduct speedy investigation on the matter.

According to him, the suspects will be arraigned and if found culpable, would be appropriately dealt with by the laws of the land.

The Captain of the vessel, Mr William Ajohworode, said he was contracted by an undisclosed company to deliver the petroleum product to FPSO Mistra Limited.

He said that his employees told him before sailing the vessel that the permit would be handed over to him by Mistra upon delivery of the product.

“When we got close to our destination, a Navy gun-boat stopped us and demanded for our permit and we couldn’t provide it.

“We told them that Mistra would send the permit but the security men arrested us,” he said.

Continue Reading
You may also like...
Related Topics:pipelines, stolen diesel