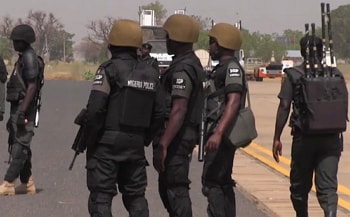 The state’s Commissioner of Police, Ado Lawan, disclosed this to journalists on Saturday in Ilorin, the state capital.

He said 17 persons comprising nine police operatives and eight other persons were killed during the attacks.

The state government has also offered to give N5 million to anyone with useful information that would lead to the arrest of the fleeing robbers.

Lawan said five banks and one finance house were attacked by the robbers.

“We have arrested seven suspects in connection with the incident. One of them was arrested at Igosun road and six others at different locations in Offa. They are helping us in investigation.”

“Seven vehicles abandoned were recovered from the armed robbers. Details on the injured victims have not been ascertained as they are receiving treatments in different hospitals. Some rifles were carted away by the robbers.

“In conclusion, the Inspector General of Police has ordered a full investigation into the incident and has directed his Intelligence Response Team and others to assist in getting the hoodlums arrested.

“The command wishes to express its heartfelt condolences to the families and friends of the victims while also wishing the injured quick recovery.”

In a statement issued by the Senior Special Assistant on Media and Communications to the state Governor, Dr. Muyideen Akorede, the state government urged anyone with useful information on the incident to contact the state police command on the following numbers (0803 739 1280 and 0803 236 5122).

“While we mourn our dead with a heart full of sadness, and care for the injured by paying all their medical bills, we will do everything in our power to bring the attackers to justice and ensure that never again does any community or people in our state experience such tragedy,” the statement quoted Governor Abdufattah Ahmed as saying on the incident.

Continue Reading
You may also like...
Related Topics:offa, robbery, suspects

5 Boko Haram Terrorists Killed, Others Escaped Into Caves During Gunfight With Soldiers In Adamawa
14 Killed As Junior Canadian Hockey Players Bus Collides With Truck On Hwy 35 In Tisdale Saskatchewan