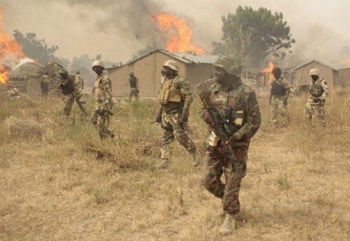 The Army on Friday neutralized 5 Boko Haram terrorists in a gun battle at Barkin Dutse area of Adamawa State.

This was revealed in a statement released by Army Spokesman, BG Texas Chukwu today.

“The terrorists on sighting the troops opened fire which resulted in exchange of fire.

“Five Boko Haram terrorists were neutralised while some of them escaped into nearby caves during the encounter.

“Also, one hunter lost his life during the operation.”

He added that troops were in pursuit of the fleeing terrorists and urged the people to report any suspicious movements in their area to security agencies.

Chukwu, who made the disclosure in Maiduguri, said troops of 33 Artillery Brigade on April 5 arrested one Saidu Jenga, 33, on Maiduguri Bye pass Road, Bauchi, in connection with Boko Haram activities.

He said the suspect was allegedly overheard discussing movement of arms and ammunition on phone.

“Items recovered include one techno phone with two sim cards as well as N6, 870 cash,” he said.