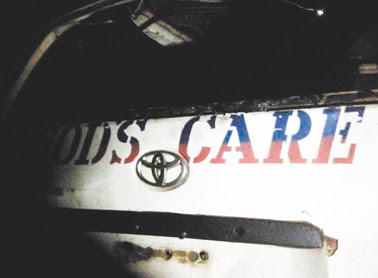 January 23, 2018 – 8 Libya Returnees From Benin City Edo State Killed In Motor Crash In Ogun State On Their Way To Church Of Lagos Pastor Who Gives N50,000 To Libya Returnees

The deceased who were brought home from Libya last week returned to Edo state shortly after they landed in Lagos but on hearing that a popular Lagos Pastor gives out N50,000 each to Libya returnees, they immediately boarded a night bus to Lagos with the hope that the Pastor will give them their own N50K but sadly, they never made it.

The incident which happened last week Tuesday at J4 axis of the aforementioned highway involved an 18-seater commercial bus and a white Volvo truck.

The driver of the truck reportedly drove against traffic rule when he had a head-on-collision with the commercial bus.

8 people reportedly died on the spot while 7 others sustained injuries after the commercial caught fire.

The corpses of the deceased have been deposited at Ijebu Ode General Hospital where the injured are also receiving treatment.

Oladele who didn’t commiserate with the family of the deceased said the following words nonchalantly.

”It is not like they were kept in prison as in Libya. They might have embarked on the trip to Lagos on their own. However, the government will make efforts to reach the families of those who died or are injured.”

The identities of the victims are yet to be disclosed, as there was no manifest from the commercial bus to indicate their names and destinations.

Continue Reading
You may also like...
Related Topics:edo, libya, returnees