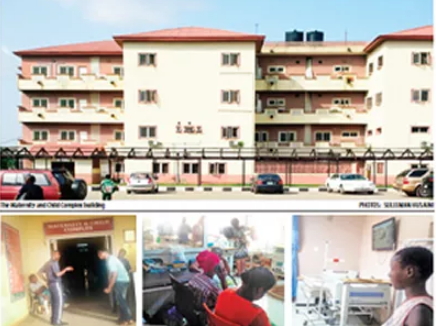 I do not have money to pay. Besides, the loss of the baby is depressing for me. I even begged them to consider my dead baby and empathise with me by reducing the bill, but they rejected all the appeals – Mrs. Funmilayo Adegboye, a petty trader

Eight women, who were newly delivered of babies, have been detained at the Alimosho General Hospital, Igando, Lagos over their inability to pay accrued hospital bills arising from delivery services. Consequent upon this detention, the movement of the affected women has been restricted to the premises of the Maternity and Child Complex (MCC) domiciled at the Alimosho General Hospital.

The women, who often wear uniforms provided by the hospital, are closely monitored by security officials on duty who ensure that they are always restricted within the MCC. Investigation by New Telegraph shows that it is not only security officials that monitor the detained patients, even nurses on duty keep an eye on the patients anytime any of them steps out of the ward where they are being held.

One of the detained women, Fati Mohammed, had now been abandoned by her spouse owing to the couple’s inability to pay baby delivery service fee. Also detained are Mrs. Anna Ifoga, who is a petty trader; Mrs. Funmilayo Adegboye, also a petty trader, and Mrs. Basirat Kosoko.

According to reliable sources, appeal made to the hospital management by the trio of Funmilayo’s husband, Basirat’s father-in-law and Anna Ifoga, last Friday, seeking for them to be released on bond to enable them pay the outstanding bills by instalment while on release, was rejected by the hospital. According to the detained women, staff of the Welfare Unit, who intervened on their behalf, told the patients that the hospital management insisted that each of them must pay the outstanding bills before they would be allowed to go home. Although they had been discharged after baby delivery, they would not leave the premises of the hospital until they settled their bills.

Speaking to New Telegraph, Basirat’s father-in-law regretted that his son, who is Basirat’s husband is out of job, hence was unable to raise money to pay the N149,000 bill for taking delivery of his baby through caesarean section.

However, Basirat’s fatherin- law initially paid N98,000, leaving a balance of N51,000 to be settled later. Both Basirat and the newly delivered baby were held in the health facility in Igando for two weeks until Monday, February 19, when her father-in-law rallied family and friends to pay the balance of N51,000. On her part, Funmilayo, who also delivered her baby through caesarean section, was rushed to Alimosho General Hospital on emergency. She lost the baby three days after it was delivered.

However, she was given a bill of N103,000. Although her husband, Mr. Adegboye, had paid N15,000, his appeal to the hospital through the Welfare Unit, was similarly rejected. The detained Funmilayo still has an outstanding bill of N88,000 to settle. Adegboye said his appeal to get the N103,000 bill reviewed downward was rejected by the hospital management. He said: “I have tried to raise money to no avail. I am very disturbed about the way the hospital staff are treating my wife now.

“Presently, my wife has been chased away from the hospital bed; she has been sleeping on a chair in the last four days. They no longer allow her to sleep on the bed. “Although she is not also being served food, hospital staff said both the bills for the two daily meals served to patients at the cost of N800 at N400 per meal and the N250 daily for the bed space will continue to run.

“I do not have money to pay. Besides, the loss of the baby is depressing for me. The baby had died in my wife’s womb even before the surgery was done. “I even begged them to consider my dead baby and empathise with me by reducing the bill, but they rejected all the appeals.”

Funmilayo has been ‘detained’ for two weeks. On her part, Anna has paid N118,000 of the N160,000 bill for caesarean section delivery, remaining a balance of N42,000. She has been held in the hospital for one month because of her inability to pay the balance of N42,000. Relating her ordeal, Anna told New Telegraph that she had gone through labour for two days at the Ikotun home of a traditional birth attendant (TBA) and owing to the delayed delivery; she was rushed on emergency to the Alimosho General Hospital, Igando where it was found that the baby had died in her womb.

Similarly, days after the caesarean surgery, it was found that the stitched stomach had collapsed, through which the open wound was emitting pus. She said: “I was taken into the theatre again where the medical doctors stitched the wound for the second time.

“The stiches have, however, healed now, but I have not been released to go home because of my outstanding bills.” Of all the detained women, Fati Mohammed’s case is the most pathetic. She has been in the hospital for over two months.

Fati, who is from Baga in Borno State, does not know her real age, but appeared to be under 20 years. Going by the turn of events, Fati, whose baby also died even before the caesarean surgery was carried out, may have been abandoned to her fate, considering that neither the man who impregnated her, Diri, nor any of those who rushed her to the hospital has been coming to the hospital to check on her.

It is not clear how much has accrued as her total bill for the caesarean section. Although, the baby died, Fati is lucky to have survived. Relating her ordeal, Fati said she fled Borno State after her husband was slaughtered by Boko Haram members. Also, she said she did not know where the only son of that relationship was presently.

Fati followed others who were fleeing from Boko Haram in Borno, in a trailer to Lagos State and on getting to Lagos, however, she cohabited with some Hausa-speaking people at Alaba in Ojo area of Lagos, where a young Hausa indigene, driving commercial motorcycle, later impregnated her. She said after falling into labour for two days, she was rushed to the Alimosho General Hospital, Igando, where it was found that her baby had died in her womb. Hence, the surgical operation was conducted on her and the dead baby removed. She said: “I did not attend any antenatal throughout the nine months of the pregnancy. However, when labour set in, I laboured for two days but could not be delivered of the baby.”

The caesarean surgery conducted on her to remove the dead baby at the Alimosho General Hospital was successful, but she has not been able to settle the bill. When asked how much the bill amounted to, she said only the nurses could say.

The sad aspect of it is that after visiting Fati on a few occasions but could not pay the bill, Diri, Fati’s spouse stopped further visits to check on her. Presently, Fati disclosed that the man who impregnated her had absconded. Both Fati’s father and mother were killed by the Boko Haram insurgents way back before she arrived Lagos. On how she has survived in the last two months that the hospital management restricted her movement, Fati explained that the hospital had been kind enough to be giving her food daily. She said the meal of patients who could not eat due to health challenge, was sometimes given to her, considering that she had no other source of food or income.

“Sometimes, when some patients cannot eat their food, they will give me the food. I also beg for water to drink,” Fati said. Efforts to get the reaction of the Public Relations Officer of Alimosho General Hospital failed. However, a reliable source in the hospital told New Telegraph that most of the patients being held for inability to pay their bills, were unbooked patients.

They were referred cases from other hospitals brought in on emergency, which the facility responded to, saving their lives, based on its Motto: ‘Patient First’.

According to the source, if they had come to the Alimosho General Hospital from the onset of their medical care, especially in care of antenatal, “that way, at least 50 per cent of their bill would have been paid before delivery.”

The source said the hospital battled to save their lives before asking for money. “In order to extend life-saving services to patients on emergency too, the hospital needs to have recurring cash for that,” the source added.

How A Retired Soldier Killed My Husband With Poisonous Knife In Ikorodu Lagos – Widow
How Brave Woman Fought Fulani Gunman, Seized His Gun During Farm Attack In Edo State