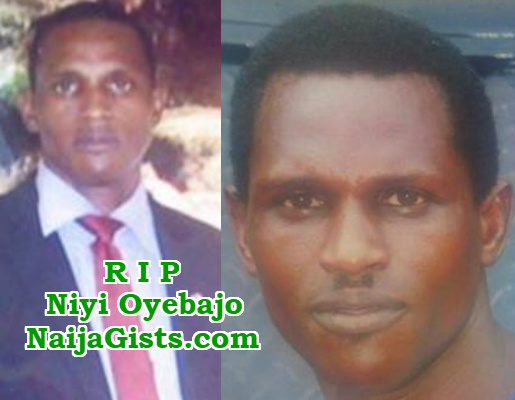 Feb 23, 2018 – How A Retired Soldier Killed My Husband With Poisonous Knife In Ikorodu Lagos – Widow

Uche Oyebajo was a picture of grief as she recounted how a retired soldier killed her 50-year-old husband, Adeniyi Oyebajo, leaving her a widow and her children fatherless.
Even as she told the haunting story of death and loss, tears filled her eyes. She tried to control the tears, but lost the battle midway through her story.
According to her, her husband was killed by none other than his 70-year-old Uncle, Gbolahan Ajasa, a retired soldier.

The grieving widow said Ajasa stabbed Adeniyi to death after he tried to stop the former from fighting his sister, Madam Olatubosun, who incidentally is Adeniyi’s mom.
Ajasa was alleged to have jumped on Adeniyi from behind, wielding a knife, moments after the deceased attempted to make peace between sister and brother.

Weeping silently, Uche said: “I was in the sitting room with my children when I heard my husband’s voice that night. I came out to check; I noticed he had gone back to where the quarrel was going on. I followed him to the next compound, which was close to ours.

The compound is where his uncle, Gbolahan lives. I noticed that the two of them was arguing over an issue. When I noticed what was going between them, I held my husband’s shirt and begged him not to go to the old man’s house.

“He listened and followed me. As we were leaving, Uncle Gbolahan sneaked from behind and stabbed my husband in the stomach. There was no power supply that night. I thought my husband was urinating on his body. It was when he moved a bit that I saw blood gushing out of his stomach. His intestines were out and dangling. I was turned into a widow and my children orphans. I’m a full time housewife. I don’t want my husband to die in vain.”

Ajasa was alleged to have killed his nephew with a poisonous knife at Lowa area of Ikorodu, Lagos State.

Ajasa was allegedly fighting his sister over a property, when Adeniyi came to make peace. The property, which was under dispute, was inherited from their late father.

Adeniyi was with some his friends at a nearby beer parlour in the community on the fateful day, when his mother called him on the phone that his uncle had started fighting her again.

The incident, which occurred on Sunday about 9p.m., was said to have thrown the community into mourning.

Adeniyi’s younger brother, Mr. Adeleke Oyebajo, explained that his late brother was with friends when their mother called him on the phone to come and rescue her from her brother.

He said: “My mother is the first child of their parents. She advised her other siblings to give their late father’s house, located at Ladega area of Ikorodu, to a developer to develop it. They all agreed to go with whatever she said since she is the eldest.

“Unfortunately, when she approached Uncle Gbolahan, a retired soldier, to inform him of what she discussed with their siblings, he picked up a quarrel with her. He held my mother’s clothes and threatened to beat her. Just to avoid trouble, she called my elder brother to come and pacify Uncle Gbolahan and to also reason with him.

“Immediately my brother received the phone call from our mother, he left what he was doing. He went straight home. When he got home, he met sister and brother exchanging words. He persuaded the retired soldier to go into his apartment.

“My brother was coming out from Uncle Gbolahan’s apartment, when Uncle Gbolahan suddenly came from behind and stabbed him in the stomach. It was the screams of my brother that alerted people that something was wrong. He was rushed to the hospital, but died on the way.”
It was learnt that another man, Gbenga, who attempted to confront Ajasa, was also inflicted with knife cuts by Ajasa.

When Ajasa realised what he had done, he quickly dashed to Igbogbo Police Station, to report that armed robbers attacked him. He also told the police that he killed one of the armed robbers and inflicted injuries on two.
Ajasa was still at the police station, writing his statement when Adeniyi’s distraught mother, Olatubosun, got to the station. When she sighted her brother, she cried out and begged police not to allow him to escape, that he had just murdered her son. Ajasa was immediately arrested and detained.

Some youths in the community, who were irked by Adeniyi’s death, embarked on a protest and vandalised the home of Ajasa.
Adeniyi’s daughter, Happiness, described her late father as a “friend and a father.”

She said: “I was in school when I got a phone call from my cousin that my father had been stabbed. I became restless. It’s not going to be easy with my father dead; but I know that with God everything will be fine.”

A resident, who does not want his mentioned, said: “The death of Adeniyi was a big loss to the community. He was an easy going man. We were together on the fateful day before he was killed. I’m urging the police to investigate the matter and not sweep it under the carpet.”

Ajasa was on February 19 arraigned before an Ebute Meta Magistrates’ Court in Lagos for the murder of his nephew. The Magistrate, Mrs. O. O. A. Fowowe-Erusiafe, ruled that Ajasa would have to remain in prison custody pending receipt of legal advice from the office of the Director of Public Prosecutions (DPP). The plea of the accused was not taken.

Earlier, the prosecutor, Sergeant Courage Ekhueorohan, said the offence violated Section 222 of the Criminal Law of Lagos State, 2015. The case has been adjourned till March 19.