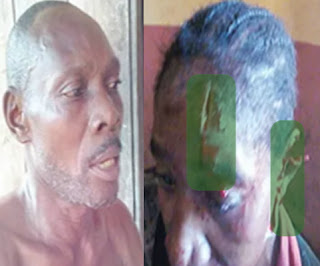 Hannah Toweh, an 18-year-old lady has narrated how a herdsman entered her family’s farm and laid an ambush for her and her mother, Mrs. Patricia Toweh, at the Ofunwengbe community in Ovioa South-West Local Government Area of Edo State.

Hannah, who spoke from her hospital bed, said that the herdsman attacked them with a machete after threatening them with a gun.

Hannah and her mother, Patricia, are presently in the hospital, battling to live because of the machete cut injuries inflicted on them.

While Hannah sustained deep machete cuts on the forehead and right hand, Patricia, 52, had a deeper cut on her forehead and sported a left severed ear.

The incident occurred about 9a.m., February 5, while the victims were working in their cassava farm located close to a plantain plantation on the Benin-Okada-Ore-Lagos Expressway.
Patricia, like a lioness, was said to have struggled with the gunman, trying to wrestle his rifle from him.

Immediately the struggle started, Hannah started screaming.
Hannah later rushed home to alert family members and residents at their quarters on Redeemed Church Road, Ofunwengbe. Mother and daughter were rushed to a nearby hospital.

Recollecting the incidents that culminated in the attack, Patricia said: “Herdsmen led cattle into my two acres of cassava and destroyed all the crops. I went to my landlord and begged him to meet the leaders of the herdsmen in the community.

According to her, the Divisional Police Officer (DPO) in the area asked the leader of the herdsmen to bring one of the persons, suspected to have carried out the act, to the station.

She said: “Jubrin brought two men to the station. The DPO asked me to identify those that led cattle into my farm. I told him that the suspect was not among them. Jubrin said that the two persons he brought were involved in the cassava destruction and that they caught one Alhaji Yellow as one of them.

“We had to go for the arrest of the said Alhaji Yellow. But when we reached the police station, Yellow and the policemen started speaking Hausa language which I don’t understand. At the end of it all, the police said that it was not Yellow that committed the crime. They released him. Police said we should go and settle the matter amicably.

“I was in my house when Jubrin came and told me that the police asked us to settle. I told him that they should pay me N400,000, but Jubrin dropped N25,000 on the floor. I insisted we must go to the police station to settle the matter. Jubrin later promised to balance N15,000, but I called the police who asked us to come to their station. Jubrin called me to say that he had deployed three persons to guard my farm against further incursions.

“He asked me if I had not gone to the farm. And he kept asking me this until I became suspicious. We now resolved the matter at Iguobazuwa on Saturday.

“On Monday, I went to the farm with my daughter. As we were working, I didn’t know somebody was inside the farm, hiding under the palm tree. Suddenly I noticed a man with a gun and he said, madam, ‘I will shoot you.’ We begged him and then I struggled with him, trying to take the gun from him. The man fell down, and then he pushed me down. As I fell, my daughter rushed towards us; the man cut my daughter with his machete. He also used the machete to cut my ear and forehead.

“It was God who saved my daughter and I. We were both covered in blood and weak. The man ran away and my daughter picked his gun. I shouted, but nobody was in the bush. People later came and took us to the hospital and later to the police station. We handed the gun over to the police.”

Hannah, who corroborated her mother’s explanations, denied there was an attempt by the herdsman to rape them.

He said: “I was not at home when the incident occurred. I got home and saw a crowd of people in my compound. The shock and pains were too much, but fortunately, it was not more than that. At least nobody died. If it had gone beyond that, I don’t know what I would have done.”

Confirming the incident, the state Commissioner of Police, Mr. Babatunde Kokumo, said that the command was investigating the matter.

The commissioner vowed that justice would be done quickly in the case.
He added: “The woman was brought before me today. We are looking at a way to ensure justice is done speedily.”