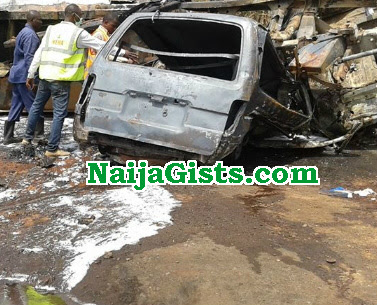 9 people suspected to be journalists, lost their lives in a car crash in Enugu State, the police said on Friday.

The spokesman for the Enugu State Police Command, Mr. Ebere Amaraizu, said the accident occurred on Monday, November 7, at Ninth Mile Corner, on the Enugu-Nsukka Expressway.

He said the victims, comprising seven males and two females, were believed to be journalists, as they were travelling in a Nissan bus with registration number ‘NUJ 3’. He added that the identities of the victims had yet to be ascertained.

Amaraizu said reports of the accident just got to the Enugu State Police Command shortly before this report was filed.

He disclosed that the bus conveying the victims from Benue State reportedly had a brake failure as it descended a hill and subsequently, crashed into a stationary vehicle before veering into the bush.

The PPRO said the passengers, who became unconscious after the crash, were rushed to nearby hospitals, where the nine victims were confirmed dead.

However, he added that an undisclosed number of passengers survived the accident, adding that the driver of the ill-fated vehicle, one Adams Awudu, had earlier complained of the faulty brake, but was told to manage it before the accident occurred.