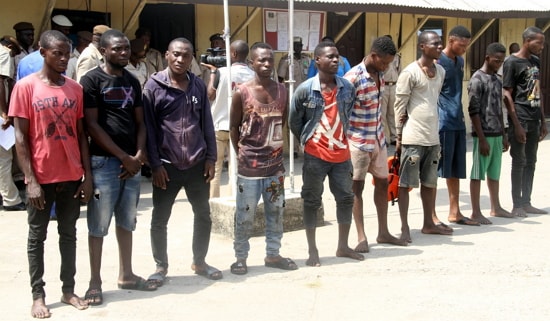 9 Nigerians and a Niger Republic national trying to enter Europe illegally have been arrested by security operatives in Lagos.

The suspects were apprehended inside two Merchant Vessels- MV MSC PAOLA and MV MAERSK CHANNIA – by officials of the Nigerian Immigration Service (NIS) and the Nigerian Navy (NN) respectively.

It was gathered that five of the suspects, were apprehended by naval personnel during routine patrol on Monday, while others were caught by NIS officers on Sunday by the Fairway Buoy.

The suspects, it was learnt, got into the vessels with the help of local fishermen, not knowing that foreign ships only sailed within West African waters.

Parading the suspects on Wednesday, NIS Lagos Seaport and Marine Comptroller, Modupe Anyalechi, said those arrested on Sunday were discovered inside a rudder truck of MV MSC PAOLA.

“Our efforts have made it almost impossible for stowaways to access vessels from the quayside; hence, they now resort to using canoes with the assistance of fishermen, to get into vessels through the propellers when the vessels are gradually sailing to the high sea along the channel.

“This was confirmed in the confession of the stowaways. Their reason for this act, as they claimed, was in search of greener pastures in Europe and the western world. Unknown to them, some of these vessels are coastal ships, whose activities are limited to West Africa and the Gulf of Guinea.”

One of the suspects, Odogun, an artiste, said he had been performing at different shows without making headway in life, adding that he thought the risk would change his destiny for the better.

“I do not hate my country and I am not trying to run away from Nigeria. I just needed a place where I can find help. I am an artiste and I have gone for many shows without making it. I am not aware of the risk I took; but I believed whatever the risk involved, God would save me and I would not die. And thankfully, I did not die even when I was apprehended by my own government. My mother died two months ago and my father is crippled. I am the first child of my father and my only brother is in the village.”

Popoola, 28, admitted his boarded the vessel in search of better life, adding that he went in as individual.

The suspect said he had thought the vessel was Europe bound, adding that he was prepared to risk it all to go overseas.

He said: “I will take any risk to find my way out of Nigeria. I have no job. I am doing nothing. I believe if I can follow a ship to Europe, I can be anything I want to be. I thought the ship was going to Holland or anywhere in Europe where I could make it.”

Wessey, 24, who claimed to be a Lagos State indigene, said he wanted to leave the country to play for a football club in Europe.

“I have been suffering for many years to be somebody in life, but no way. I am a footballer; but I don’t have connection. I want to play for big clubs in Europe. I know Nigeria has academies here, but I don’t have any connection. I felt if taking this risk will make me achieve in life, then so be it. I know I could have died while doing this. But I did it on purpose.

“I lost my mother in October 2017. I have no relative or helper. I cannot steal or rob or carry gun, which I believe will be adding hardship to my life. I will rather take the risk of going abroad to be somebody in life. Now that I have been arrested, only God knows what will happen to me.”

Opere said he had been frustrated by joblessness, adding that his attempt at joining the Immigration Service had been futile due to lack of funds.

He said: “I thought the ship was going to the western world. The life I am living in Nigeria is meaningless. I have looked for jobs in many companies in Lagos without getting any. When I got the recruitment form to join Immigration, I could not process it because I didn’t have money and my parents are dead. This is the reason I wanted to try my best to get there. I know that if I get there, I will find a better life for myself than the one I am living here.”