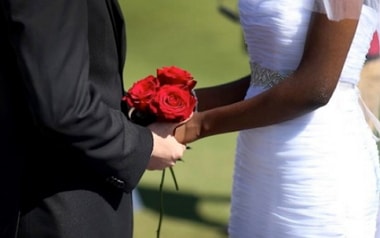 The Nigeria Immigration Service has said that a lot of fake marriages are taking place between Nigerians and foreigners in the country.

Mr Muhammad Babandede, Comptroller General of the agency stated this on Wednesday in Abuja, saying that male foreigners were mostly involved in the act.

He spoke at an operational review meeting with Zonal Coordinators and State Comptrollers of the agency at its national headquarters.

Babandede said their aim was to cheat the conditions for the issuance of residence and work permits to foreigners by the agency.

“We have observed that foreigners, especially men, are trying to beat the system of issuance of residence permits.

“A lot of fake or ‘arrangee’ marriages are going on, and that would give them permission to stay in this country without much liabilities.

“The advantage is that when you are the spouse of a Nigerian, you have no limitation on the job you will do; you don’t have to pay residence permit fees; it is easier for you to stay.

“So, we are beginning to face difficulties because many people are becoming married on temporary ground,” Babandede said.

The NIS boss said the agency had arrested some culprits, and would tighten the conditions for the issuance of permits to check the abuse.

He said that as part of the measures to check the abuse, the agency would henceforth monitor marriages between Nigerians and foreigners in the country.

“We will not allow any person to come for holiday marriage, because we have also observed that people just come on holidays, arrange marriages in Nigeria and go back.

“We will not allow that anymore; you have to stay for a period of six months after marriage before you get our residence permit.

“You have to also enter with permission to stay in Nigeria, so you must come with the residency visa; you can’t come as a tourist and get married,’’ he said.

Babandede further said that the agency was also planning to restrict foreign spouses to jobs for which Nigerians lacked the requisite skills and qualifications.

He stated that the Federal Government, through the Ministry of Interior and the NIS, was looking into the issue, which he described as a national security threat.

Continue Reading
You may also like...
Related Topics:foreigner, nigeria, permit