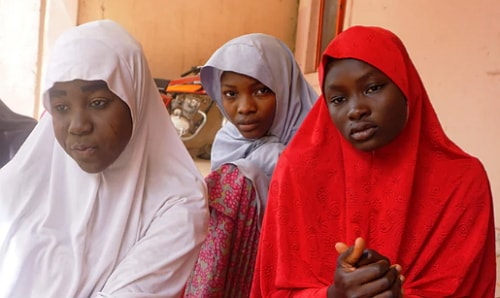 Hafsat Lawal, one of the Dapchi school girls who escaped during the abduction has narrated her ordeal.

“I was around when the students were kidnapped. I just came out of the bathroom when I heard gunshots. Initially, I thought it was an electricity transformer that exploded.

“Nevertheless, I started running and I saw my sister too running. When I asked her why she was running, she said I should shut up and let’s run for our lives. So, I followed her and we ran towards the main gate.

“We asked the gateman to open the gate for us. But he refused and told us that it was not safe outside. So we jumped over the fence and started running. We then saw some men in military uniform covering their heads with scarf. They asked us to come so that they would rescue us.

“But when we came close to them, we discovered that they were not real military men. Some of them were wearing slippers. So we changed direction and one of them started following us.

“We jumped the school fence and came inside the school premises again. We then started running towards the staff quarters. The guy who was following us started shouting that we should stop or he would shoot us.

“I disobeyed him and kept running. He then started shooting sporadically in the air. I am very sad that my sisters were kidnapped. In fact, I became sick because of the trauma of the incident.” I want to further my education, but not in this school.”

“I feel very bad that they kidnapped my sisters. At first, I thought they ran into the bush the way we did. But after the incident, we could not find them.

“There is nothing that will make me come back to this school because of what I saw. But, if the government can provide enough security in the school, I may come back.”.

Continue Reading
You may also like...
Related Topics:dapchi, girl, school