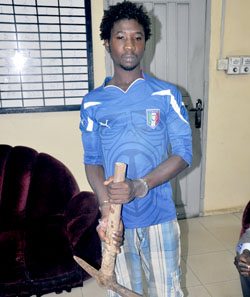 A 21 year old gardener, Anas Adam committed an heinous crime on  the 16th of June, 2012 where he hacked his 65-yr old dad to death with a pickaxe. naijagists.com

According to a report from Daily Guide Ghana, Anas axed his father to death while he was sleeping in his room in Mamobi, Accra, Ghana on father’s day.

According to Assistant Police commissioner, Mr Timothy Bonga who confirmed the story,  the suspect, his father and stepmother lived in the same house at Mamobi in Accra.

Anas said at the eve of the crime he heard voices telling him to go and hit his father. “Something came into my mind to hit him so I picked the pickaxe and hit him”, he said. Mr. Bonga said the suspect struck the left side of his father’s head, killing him instantly.

He said after committing the heinous crime at about 11:00pm, last Saturday [June 16], Anas failed to report the incident to anyone. Mr. Bonga said not until about 4:00pm of the following day when Anas reported the incident to his brother, Aziz Osman. Bonga said Osman then led the suspect to the landlord and the assembly member of the area for them to report the matter to the police.

This world is full of all sorts of evil. It’s highly essential for each and everyone of us to guide our heart and mind.

Be careful the kind of thoughts you permit because a thought allowed leads to action performed.

Guide your mind with all diligence for out of it flows the issue of life.