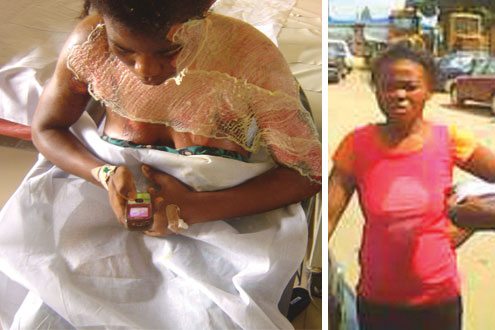 Eni Ubi, a 25-yr old lady is presently in jail over an allegation she pepper-sprayed and poured hot water on the face of her rival, 25-yr old, Adiah Okoi. naijagists.com

We learnt the two had a terrible fight over who had the right to marry a man identified as Eteng Livinus.

Before the alleged act, the two women had fought publicly at 26, Oremeji Street, Abule Egba area of the state over the man.

Eni was later alleged to have boiled water which she mixed with pepper before pouring it on Adiah’s face and body, causing severe injuries.

Narrating what happened, Eni said she had warned Adiah to stay away from Eteng because they had agreed to marry and had been together since 2008, adding that both of their parents knew about the relationship.

She said that Eteng brought her to Lagos from Akwa Ibom State, Southsouth Nigeria and since then they had been living together as man and wife.

Eni said trouble started sometime in March this year when Eteng started getting attracted to Adiah who also is from the same area with her.

Since then, she said, Eteng started behaving strangely towards her.

She said that at a time he told her that he was no longer interested in the relationship and asked her to pack out of his house, adding that the man then brought Adiah into the house.

According to P.M news investigation, Eteng confirmed he wanted to marry Eni, but changed his mind when he met her with another man.

He said he had ordered her to leave his house before he brought Adiah who he said he wanted to marry.

At the hospital, Adiah who was in pains, managed to say that before she agreed to marry Eteng, he told her that he had separated from Eni. She added that she was lying on the bed when her alleged attacker poured the boiled water and pepper on her.

Eni was charged to court under Section 244 of the Criminal Code Law of Lagos State of Nigeria 2011.

She pleaded not guilty and was granted bail in the sum of N50,000 with two sureties in like sum. The matter was adjourned till 11 July, 2012.