Ex-House of Representatives member Abike Dabiri-Erewa, who represented Ikorodu Federal Constituency between 2003 and 2015 Thursday slammed a N500 milion libel suit on Diamond Bank Plc for maliciously publishing her name as one of the bank’s debtors.

Joined as co-defendant in the ensuing legal warfare is The Punch Newspapers Limited.

In an affidavit sworn to by Abike Dabiri-Erewa and filed before the court by a Lagos lawyer Adetokunbo Mumuni, the ex-lawmaker averred that on the 4th of August, 2015,as early as 6 a. m. she was bombarded with calls, text messages and other social media networks telling her about a report in The Punch newspaper of that day which published a report that her company Thriller Endeavours is indebted to Diamond Bank Plc. 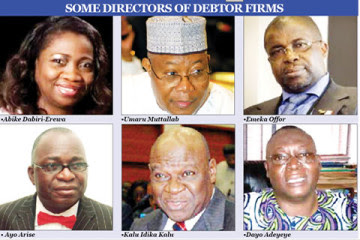 The report was on the front page of the newspapers alleging that her company Thriller Endeavours is indebted to the bank to the tune of N122,912,031.06.

She averred further that she is neither a subscriber to the memorandum and article of association of the said Thriller Endeavours nor is a Director of the said company alleged to be owing Diamond Bank.
Consequently, she said the bank was engaging in mischief of deliberate kind to include her name as a Director of Thriller Endeavours when indeed and in truth she has nothing to do with the company, while The Punch newspaper engaged in monumental mischief when it published her name on pages 1, 21 and 31of its 4th August,2015 edition as person whose company was indebted to Diamond Bank Plc.

Dabiri averred further that as a well known politician the said publication has subjected her to public opprobrium, ridicule and embarrassment of monumental proportion.

Consequently, she mandated her lawyer to forward a letter to the defendants for a retraction but they refused to comply with her demand.

A declaration that the publication which has no foundation in truth, has defamed and injured her character and she has suffered reputational damage.

N3 million being the sum paid as professional fees to her solicitors.

An order of the court directing the defendants separately and jointly to render a public apology to her in respect of the false publication made which must be published in three national dailies in addition to The Punch newspaper.